The Chimurenga musician, Thomas ‘Mukanya’ Mapfumo, who lives in exile in the United States said his wish was for every Zimbabwean to return home and ‘liberate the country from dictatorship’. 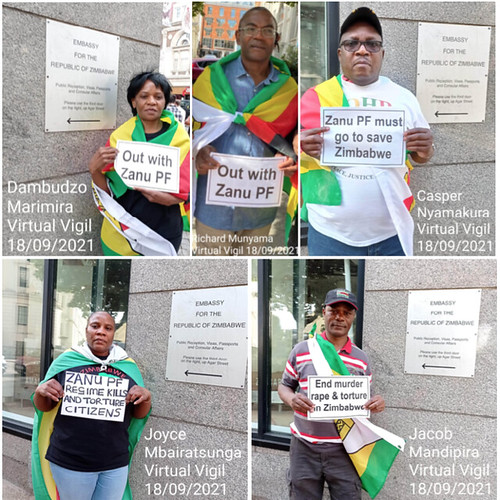 Mapfumo is to perform in South Africa in November and said he hoped to go to Zimbabwe afterwards. ‘If you want independence, you have to be home. We can only liberate ourselves if we are united because it is not easy to remove this government of today.’ (See: https://www.newzimbabwe.com/return-home-and-liberate-zimbabwe-thomas-mapfumo-rallies-exiled-zimbabweans/.)

There is mounting impatience in the diaspora at the refusal of the Zanu PF government to observe the diaspora’s constitutional right to vote. As many as one in four Zimbabweans are believed to be in exile because of the country’s economic and political situation.

Southern Africa director of Human Rights Watch Dewa Mavhinga said: ‘Zanu-PF is afraid that many diasporans who left are not happy with the way it has governed the country and will definitely vote for the opposition’.

Mavhinga continued: ‘Diasporas remain massive injectors of foreign currency into the Zimbabwean government fiscus but it still refuses them the right to vote. It cannot have its cake and eat it.’ (See: https://bulawayo24.com/index-id-news-sc-national-byo-209051.html.)

Zimbabweans in the US and Canada called for a demonstration at the United Nations headquarters in New York today over human rights abuses in Zimbabwe and the denial of their right to vote. They said they would go ahead even though President Mnangagwa said he would not attend the UN meeting in person (see: https://www.newzimbabwe.com/usa-canada-based-zimbos-plot-massive-anti-mnangagwa-demo/).

But Mnangagwa will apparently be coming to the UK to attend the United Nations Climate Change Conference in Glasgow in November. He discussed the visit this week with the British Ambassador Melanie Robinson who, the Herald reports, gave him a birthday card. The Vigil supposes that this is what they call diplomacy.

The Herald says: ‘the President’s visit is also expected to boost Zimbabwe’s chances of making its case to the global community, including the British Foreign Office for its re-admission into the international community, particularly the Commonwealth, from which it withdrew in 2003 at the height of a diplomatic tiff between Harare and London’. (See: https://www.herald.co.zw/president-meets-british-envoy-over-uk-trip/.)