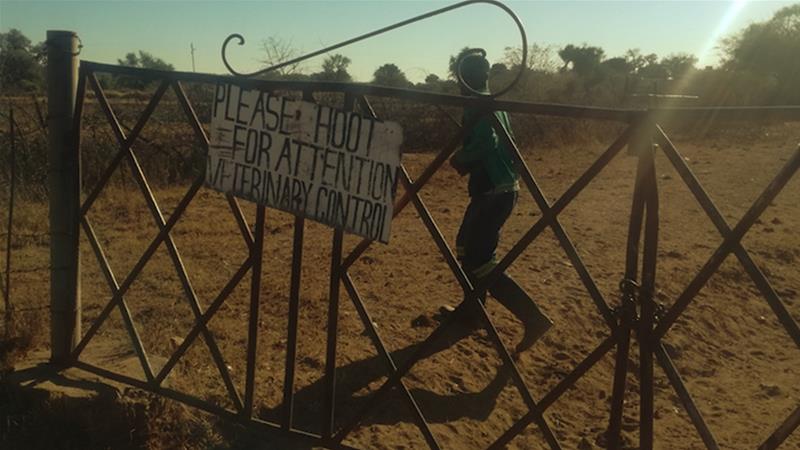 The gate at the former tobacco farmer, Shandu Gumede’s farm in Nyamandlovu, Umguza District, in Matabeleland North Province, Zimbabwe that she is now reportedly leasing to a cattle farmer. [Daylife]

When the eight-legged creature started running across the kitchen floor straight towards me one evening this week there was no time to grab a camera and click a picture, there was only one thing to do and that was to get the broom, fast! As soon as I saw it I knew it was a sun spider (Soilfugae) because it was running very fast and coming straight for me with its two long front legs held up, stretched out in front of it off the ground. Some people call them Kalahari Ferraris, a very appropriate name for these fearsome-looking creatures which can apparently run 53cm a second and can change direction in an instant, leaving you scrambling to get out the way. With the spider firmly under the bristles of the broom, some of its legs sticking out, I pushed it to the back door and tossed both broom and spider out into the darkness. There was a cool and gentle breeze outside, the stars bright in a clear sky. Dozens of weavers’ nests were dipping and swaying in the palm trees in the wind and I smiled at the broom lying out there in the dark, no way was I going to rescue it till the next morning.

Finding an abandoned broom outside the back door early in the morning has always been my shame-faced evidence of spider encounters and particularly during the years on our Marondera farm when spiders came thick and fast when summer arrived. It’s 21 years ago this month since we left our farm, finally chased off by invaders who had claimed every field and water source, every fence building and tree and at the very end set light to the farm on a windy night in late September, seeing us off once and for all. What a sad, sad September that had been: saying goodbye to all our employees and their families, taking all our sheep to the slaughter, our cattle to the abattoir – a decade of hard work gone in an instant at the hands of politically indoctrinated invaders.

It is a sadness that has been revived this week as we hear of a new wave of farm invasions presently underway in Beitbridge. ‘Settlers’ are reported to be ‘trooping in’ to Denylinian Conservancy, setting up shacks, clearing land, cutting down trees and harvesting firewood. Ranch director Ian Ferguson was quoted in the press saying: “It is terrible. They are moving further away from the river and along a mountain chopping trees and burning the bush.” (NewsDay) Denylinian Conservancy apparently belongs to the Zimbabwe Parks and Wildlife Management Authority and government resolved not to resettle people on conservancies and citrus plantations but that means nothing in Zimbabwe. Ferguson said he had eviction orders for some farmers settled on the property, but police were refusing to enforce the High Court orders – exactly as it has been for 21 years.

This is the reality of the new normal in Zimbabwe: invasion after invasion after invasion depending on who’s in power, who’s in favour and who’s got friends in high places. This new normal of land invasions doesn’t even raise eyebrows anymore, people don’t even talk about it or question why they continue to fill their supermarket trolleys with food grown in other countries twenty-one years after land invasions began, twenty-one years after we were self-sufficient in food and used to be food exporters.

You know its summer in Zimbabwe when the weird and wonderful creatures return including the fearsome Sun Spiders but also when the land invaders reappear armed with a dubious scrap of paper from a government office and an axe; come to take what you’ve got, without work, investment or consequence.

I end this letter with a note of thanks for all the wonderful messages of support, enthusiasm and praise for my new book “Zimbabwe’s Timeless Beauty” and the astounding 1,700 views of the video on You Tube. This is the book that has been twenty years in my heart, photographs and stories of our beautiful Zimbabwe that helped me to heal from decades of injustice in Zimbabwe and taught me to love my country again.
(YouTube link  https://www.youtube.com/watch?v=gihYWm_0spk )