A coruscating report on Zimbabwe by a Johannesburg-based social and political commentator says it is high time for SADC to hold Zimbabwe to account. The writer, Tafa Mhaka, says it is not sanctions that are keeping Zimbabwe in a permanent state of crisis but its own government. 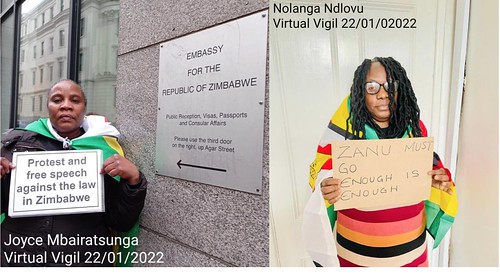 Mhaka was sceptical about President Ramaphosa’s promise on the recent 110th anniversary of the ANC that South Africa would promote democracy and economic development in Africa, particularly in the SADC region. ‘The ANC’s continuing reluctance to honestly talk about, let alone do something to address, the economic and political crisis in neighbouring Zimbabwe – despite it also having consequences for South Africa – is raising questions about the sincerity of the party’s self-declared resolve to find “African solutions to African problems”.’

Mhaka added: ‘Indeed, the entire SADC seems willingly blind to the damage the Mnangagwa administration is inflicting on Zimbabwe and the wider region with its ineffective economic policies and oppressive governing methods . . . While SADC leaders can preach about mysterious imperial plots and pretend there is no debilitating political crisis in Zimbabwe, they simply cannot do away with the victims of oppression and bad leadership on the ground: the hundreds of thousands of migrants compelled to seek sustainable economic opportunities and jobs in SADC countries, especially in South Africa . . . Today, there are credible fears that the government and the Zimbabwe Election Commission are conspiring to limit new voter registrations for the 2023 general and presidential elections – and the SADC, as usual, is silent on such an injustice.’ (See: https://www.aljazeera.com/opinions/2022/1/19/sadc-cannot-continue-to-ignore-zanu-pfs-many-failings.)

Zimbabweans in South Africa are said to be ‘worried and tense’ over reports of fresh xenophobic attacks there. The Chair of the Zimbabwe Exiles’ Forum, Gabriel Shumba, said most foreigners in South Africa felt under siege. ‘We call upon the SADC and African Union institutions to protect foreign nationals’ rights as previous experience has indicated that there either is an unwillingness or inability to act sooner rather than later.’ (See: https://www.newzimbabwe.com/zimbabweans-tense-over-fresh-sa-xenophobic-threats/.)

As preparations are made for by-elections to fill vacant parliamentary and local government seats, the US Embassy in Harare has said that the government has failed to live up to its promises to create an environment that is conducive for free, fair and credible elections. It said many continued to question the independence of the Electoral Commission (see: https://www.theeastafrican.co.ke/tea/rest-of-africa/us-pressure-on-zimbabwe-over-electoral-reforms-3689160).

Zimbabwe has been ranked among the worst in the global rule of law index compiled by World Justice Project. It said it was among the ten worst countries in ‘constraint on government powers and open government regulatory enforcement’, among other indicators (see: https://www.newsday.co.zw/2022/01/zim-ranked-among-the-worst-on-rule-of-law-report/).