HARARE, Zimbabwe (AP) — Zimbabwe has opened an international conference to try to win international support for its campaign to be allowed to sell its stockpile of seized ivory. 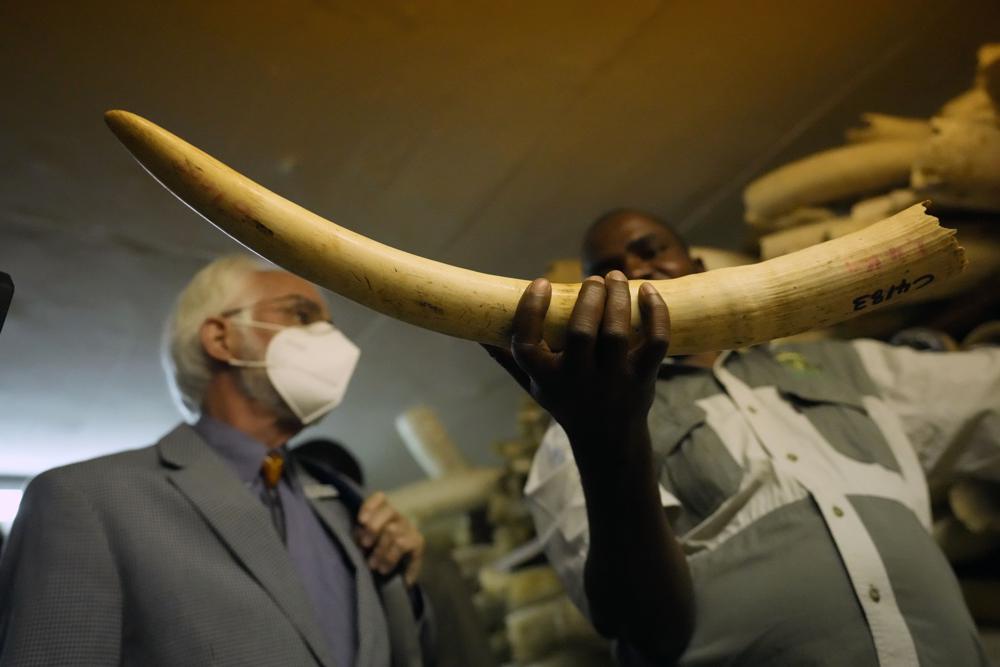 A Zimbabwe National Parks official holds an elephant tusk during a tour of the ivory stockpiles in Harare, Monday, May, 16, 2022. Zimbabwe is seeking international support to be allowed to sell half a billion dollars worth of ivory stockpile, describing the growth of its elephant population as “dangerous” amid dwindling resources for conservation. The Zimbabwe National Parks and Wildlife Management Authority on Monday took ambassadors from European Union countries through a tour of the stockpile to press for sales which are banned by CITES, the international body that monitors endangered species. (AP Photo/Tsvangirayi Mukwazhi)

If the southern African country is not permitted to sell off its 130 tons of ivory, estimated to be worth $600 million, officials warn it may quit the Convention on International Trade in Endangered Species, CITES.

The three-day conference started Monday at Hwange National Park, the country’s largest wildlife park which is in southwestern Zimbabwe. Representatives from 16 African countries, as well as Japan and China, major consumers of ivory, are to attend the gathering, said officials.

Last week envoys from some European Union countries, Britain, the United States and Canada were guided through heavily guarded vaults in Harare that are filled with piles of elephant tusks to win international support for legal sales of the ivory.

Zimbabwe’s effort to sell that ivory is controversial with many conservation groups opposing it, saying any sale of ivory encourages poaching of the pachyderms.

The conference “is sending a dangerous signal to poachers and criminal syndicates that elephants are mere commodities, and that ivory trade could be resumed, heightening the threat to the species,” said a coalition of 50 wildlife and animal rights organizations from across the globe in a joint statement issued Monday.

Southern African countries have twice been permitted to sell off their ivory stocks to Japan and China in 1997 and 2008 and those limited sales resulted in “a sharp escalation” in poaching across the continent, said the letter.

“Legalizing the ivory trade, including by authorizing another ‘one-off’ sale could have similarly disastrous consequences,” the groups said.

Zimbabwe’s estimated 100,000 elephants are double the carrying capacity of its national parks, say parks officials. The overcrowded elephants are destroying the trees and shrubs that are vital for them and other wildlife.

Neighboring Botswana has the world’s largest elephant population with more than 130,000. Together Zimbabwe and Botswana have nearly 50% of the world’s elephants. The two countries say they are struggling to cope with the booming numbers.

Opposition is coming from Kenya and other members of the African Elephant Coalition, whose 32 members are mostly East and West African countries that have fewer elephants. They argue that reopening legal international trade in ivory trade, even for a single auction, would result in increased poaching.

CITES banned the international ivory trade in 1989 to curtail poaching. In addition to banning ivory sales, CITES in 2019 also imposed restrictions on the sales of wild elephants caught in Zimbabwe and Botswana, a move that pleased some conservationists but dismayed officials struggling to manage their overcrowded parks.

There is a flourishing illegal trade in ivory in which international syndicates fund poachers to kill elephants and saw off their ivory tusks. The ivory is then smuggled overseas, where there is a demand for ivory for jewelry and trinkets.

Increased poaching and loss of habitat have made Africa’s elephant populations more endangered, the International Union for Conservation of Nature said last year.

Zimbabwe and Botswana say they are ill-equipped to deal with poachers without the money from ivory sales, especially because earnings from tourism have dwindled due to COVID—19 related travel restrictions since 2020.