Globalisation and its sidekick, free trade, are sold to us as the ways for African nations to escape their disastrous economic situation, and join the great nations of the world. So when Barclays Bank starts to question it, it becomes fascinating. 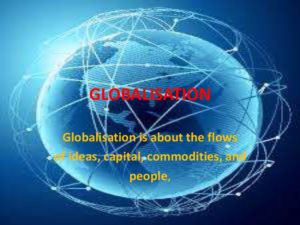 Barclays is one of the world’s biggest multinationals, with a revenue capable of buying several African nations. And more than anything, it owes its size to its ability to ride the globalisation bandwagon. Indeed, without it, it would be just another bank. You would have thought it would have defended globalisation to the nth degree.

So when it breaks ranks and starts to question globalisation, the rest of us need to sit up and take notice. In fact, it is drawing back to become a Transatlantic (i.e., European/North American business), and is already selling its African operations, as Zimbabweans know.

This is good news to the many African activists and campaigners who for years have been questioning the power of foreign (mainly Western and Chinese) commercial and financial interests in Africa, and who blame that directly for the vast number of African citizens still being in severe poverty so many years after the end of colonialism.

It is also good news for the AU. In its Agenda 2063, it has seen the problems caused by free trade and globalisation, and intends to dramatically cut Africa’s dependency on global forces by heavily building up an intra-African trade and financial system.

This is contrary to what Westerners want. They claim that unless Africa embraces globalisation, it cannot develop. That is rubbish: with over 1.1 billion people, as big as the combined populations of Europe and North and South America combined, it is easily big enough to provide all African citizens with a Western-quality lifestyle, which is what Agenda 2063 is aiming for.

Supporters of globalisation deny it is the cause of Africa’s woes. That, they say, is entirely down to Africa’s own corrupt governments. And if they ran their countries properly, globalisation would have worked and poverty would be disappearing. However, that is not true because:

Even if every African government was honest and well-meaning, the vast majority of African citizens would still be in dire poverty.

And that is because of globalisation (of course, that is a slightly false argument because an African government that was competent, and genuinely wanting to get its citizens out of poverty and into affluence, would have seen through the Western rhetoric about globalisation and free trade, put barriers up to it, and be heavily supporting Agenda 2063).

The trouble is that the arguments used to promote globalisation and free trade are very plausible, and its supporters are very effective in the way they are simply dismissive of opponents.

In part, they are right: in theory, one cannot argue with the principle, which is why academics, Western economists and Western aid workers who genuinely want to eradicate poverty in Africa all support it.

But in practice it is different. And a big sign that a concept is faulty in practice is when its promoters have to bend the truth in order to make their argument. Let’s have a look at their claims, and you will see how false they are.

That is completely untrue, and even a cursory look at history proves them wrong.

The world’s richest nation, the USA, was very protectionist until it had built up a strong domestic economy. The economic power of the UK, they say, was entirely built on globalisation – just look at the Commonwealth. That, too, is wrong. Globalisation means free trade both ways with no barriers. What the UK did was take what it wanted from its colonies and use them as a market for its own goods.

However, within its own borders, the UK was highly protectionist, putting up tariff barriers and import restrictions where it wanted to protect its own industries. So the relationship of the UK with its colonies was not globalisation, it was exploitation.

All the other developed nations were also protectionist in their early days, including Japan which had strong tariff borders until it was strong enough to compete globally. Then it burst out and used globalisation to decimate industries in the USA, the UK and Europe.

Both China and South Korea, by far the biggest success stories in the developing world, were also heavily protectionist until they, too, were strong enough to compete globally.

In fact, you will not find any a nation that has gone from poverty to affluence via globalisation or free trade. It is quite clear that what one needs to do is be protectionist until you are strong enough to compete on the open market. In other words, make as much as you can yourself and only import what you have to.

Contrast that with what is being done in Africa. The West and China, particularly, have no interest in allowing African nations to build up their expertise and economies behind closed borders. The opposite in fact – the UN, the World Bank, the IMF, the World Trade Organization and Western governments put huge pressure on African nations to open their borders. Much of aid or loan restructuring by the World Bank and IMF has been conditional on borders being opened.

The result has been to keep African citizens in poverty. Possibly the best example is Ghana which was once touted as the World Bank’s star pupil for free trade. Its economy was devastated when it fully opened its borders.

That is true. But what supporters don’t tell you is that your borders will also be open to the powerful, wealthy nations invading your markets. And what chance have you of developing your own home-grown businesses and industries in the teeth of powerful foreign opposition?

The evidence is all around us. What actually happens is that we sell basic commodities (tea, coffee etc) abroad for them to turn into products and sell back to us at a big profit. Expecting a developing nation to compete with a developed nation is like a mini trying to take on a bulldozer head on. Which do you think will win? And will continue to win?

Tomorrow, we will look at another four reasons why globalisation and free trade are not the saviours of poverty for us that the West pretends. And why it is in fact a tool of Commercial Colonialism, a sledgehammer being used to keep Africa in economic submission, and one of the major reasons who extreme poverty is still the norm in Africa when, had different policies been pursued it could have been eradicated years ago.