Robert Mugabe and his entourage of hangers on refer to themselves as â€˜the peopleâ€™s party.â€™ Those on Mugabeâ€™s propaganda payroll refer to his wife as a â€˜philanthropist.â€™ 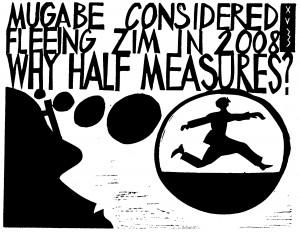 However, the facts suggest that Zanu (PF) is anything but a people-centred party and Grace is many things â€“ but NOT the humanitarian we hear of.
At over 80%, Zimbabweâ€™s unemployment rate is reminiscent of Europeâ€™s Great Depression era. In the week following that iniquitous Supreme Court judgment, allowing employers to terminate employment contracts on three-month notice (or less), approximately 6,000 people lost their jobs, as local industry grapples with low liquidity and flight of funds.
The countryâ€™s road network is characterised by gaping chasms and fallen traffic lights. Finding a tap that yields clean water is, if you will excuse the cruel pun, a pipe dream. State hospitals cannot afford the basics; drugs, sutures and latex gloves. While claiming it has no money to pay local maize farmers, government has scraped together sufficient funds, in order to import 700,000 tonnes of maize to avert looming famine.
The civil service habitually pays salaries late, as do most in the private sector. An inestimable number of Zimbabweans roam the streets carrying all sorts of cheap merchandise, struggling to evade the authorities while simultaneously attempting to make a living in a place where everyone is selling something.
Global Finance magazine ranks Zimbabwe as the second poorest country in the world â€“ only richer than the DRC, a country that is only behind us due to the ravages of civil war. With most families only eating one meal a day, it is a miracle that we do not see vultures circling above us.

Two hours of torture
It is against this background of tear-inducing poverty that First Lady Grace elected to throw herself a lavish 50th birthday party. For the chance to shower insincere praise on Grace at her birthday dinner, guests each paid $2000. While mere mortals will settle for the discordant singing of their friends and family â€“ â€˜happy birthday to you, happy birthday to you â€“ Grace imported a singer all the way from South Africa. Benjamin Dube flew in to sing for the benefit of the First Ladyâ€™s expandable ego. ZBC inflicted upon our eyes and ears, two hours of torture by beaming the dastardly event, live.
For many in government, it was an opportunity to buddy up with the presidentâ€™s wife. After what she did to the likes of Joice Mujuru and Ray Kaukonde, no one in Zanu (PF) will want to be seen as not dancing to her tune. The ZRP Commissioner General was one such shoe licker.
â€˜Your Excellency, you are a distinguished philanthropist, mother of the nation, virtuous and visionary leader of unquestionable integrity. Certainly your unyielding commitment to the welfare of women and children can never be underestimated,â€™ read the Commissionerâ€™s birthday message.
The women and children of Manzou Farm might differ with Chihuri.
What is most peculiar is that, despite publicly bragging about being a businesswoman, Grace the co-owner of Gushungo Dairy and mansions in Zvimba, Borrowdale and Mazowe, sent her minions on a door-to-door shakedown, demanding â€˜donationsâ€™ from the endangered species called private sector. Even the struggling government owned enterprises were asked to donate anything from $35,000 to $120,000. The Zanu (PF) aligned ZBC has the audacity to tout her as some sort of female Dalai Lama who deserves to be given the little that we have.
They shamelessly ran adverts of ashy faced children â€“ the supposed beneficiaries of Graceâ€™s benevolence â€“ and they even threw kids in wheelchairs into their emotive PowerPoint slideshow, while some hired voice-over bootlicker guy spoke in a solemn tone about the virtues of Grace. Given the prevailing economic crisis, the Mugabes should be giving charity to us, the citizens, rather than the other way round.

Fake degrees
In 2014, Grace somehow contrived a philanthropy award to match the unearned PhD that was handed to her by the henpecked hubby. To illustrate her famed virtue of kindness, she began 2015 by burning the huts of 200 families at Manzou Farm, just so she could have giraffes browse in her backyard. In February 2015, Bob and Grace blew a cool million on a needless birthday party which saw Africaâ€™s most fossilised president commandeering a whole NRZ train and several Zupco buses.
Graceâ€™s youngest son, that angelic child Chatunga, regularly tags along on presidential foreign trips, as if Mugabeâ€™s swollen entourage needs any more reinforcements. For blushing bride, Bona, in 2014 the Mugabes burnt through $5 million dollars to hold a wedding that probably made the nuptials of Prince William and Catherine Middleton seem like children playing a game of house, with mud pies and plastic tea sets.

Sally trumps Grace
The ZBCâ€™s assertion of â€˜humble hardworking compassionate womanâ€™ would be the funniest joke of 2015 â€“ if we were not too hungry to laugh. All this phoney praise begs the question, how can a woman who cooked up a university degree ever be described as â€˜hard working?â€™ Often meddling with matters of state, Grace cannot be called â€˜humble.â€™ She has repeatedly shown a lack of compassion by dispossessing farmers of their land in Mazowe, just so she can have uninterrupted golden sunsets, without any offensive peasant huts blocking her view.
But this latest stunt â€“ the extortionist â€˜fund raisingâ€™ campaign and the lavish party â€“ truly shows that neither Mugabe nor his wife care one iota about the lives of ordinary Zimbabweans. To make any Gallic references of â€˜let them eat cakeâ€™ would make a mockery of a famished citizenry, many of whom might suffer gastronomic shock, if they were to suddenly receive a loaf of bread, let alone cake.
In an interview aired on the state broadcaster, Grace denied having presidential ambitions. â€˜I have never said I would want to be the President. Of course, there are people who may be talking about it out there, but I have never sent anyone to talk about it,â€™ said Mrs Mugabe.
She may deny having any designs on the presidency – but lately her actions say otherwise. She has Bob-like red carpet airport arrivals, bob-style birthday feasts, and self-exalting interviews.
In her 12 years as First Lady, Sally was known only for her charity work. Not once did the late Sally ever throw herself a party of such obscene proportions. Once 24-year-old Grace Marufu grabbed another womanâ€™s husband, the tone was set. It was obvious, there and then, that her legacy would be one of a ruthless taker.

Worse than Rhodesia
President Mugabe, whose bucket list only has one item â€“ to die in office â€“ cares little for the citizens he has subjugated. In only five months, government travel expenses have reached $25M â€“ thanks to Mugabeâ€™s globetrotting. Harare city council demolished 25 houses in Westlea last week. Upon his return from gallivanting, Mugabeâ€™s reaction is not outrage but to simply say, â€˜more cake please.â€™
For all its cruelty, the Rhodesian government never took money from citizens, just to throw a party for Janet Smith. Michael Jackson might have been referring to the Mugabes when he sang, â€˜they donâ€™t care about us.â€™
– Till next week, my pen is capped. JerÃ  Twitter @JeraZW