A battle is raging between licensed miners and thousands of unsuspecting voters, who were allocated claims by Zanu (PF) ahead of the 2013 general elections. While the problem is reaching boiling point in the Midlands province, sources revealed the clashes were rampant across the country. 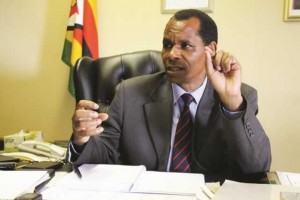 MP for Shurugwi North, Francis Nhema: accused of leading the fraudulent allocation of the claims.

In Shurugwi thousands of people from rural and urban areas were allocated claims in 2013 by the ruling party in the gold-rich Boterekwa area. The plots measured up to 1 000 square metres and the beneficiaries were led to believe that they had been registered to mine in the area.
â€œIn 2013, Zanu (PF) members came and informed us that there were claims up for grabs. They said allocation of the claims was part of the partyâ€™s programme of empowering Zimbabweans and even though we initially had our doubts, we felt it was worth trying,â€ said Mike Mukute, a resident of Mkoba who has been out of employment for more than four years.
â€œPeople flocked to the claims and, for sure, there were people who were busy pegging them. We were also introduced to men and women who we were made to believe were from the commissioner of minesâ€™ office,â€ he added.

Campaign gimmick
The thousands of â€œbeneficiariesâ€ paid $100 each for the claims and some even went ahead to build structures. â€œWe were actually made to sign some papers which the Zanu (PF) members claimed were documents transferring ownership of the claim to them. Little did we know that it was a campaign gimmick,â€ said Peter Mapanzure from rural Shurugwi.
Most of the unregistered miners did not benefit much from the claims as they either did not hold meaningful deposits or the settlers lacked necessary equipment. But some struck gold and quickly invested in equipment that they installed on the mines.
â€œSurprisingly, new faces emerged claiming the claims were theirs. Fierce fights have broken out between the new claimants and those that had been settled there by Zanu (PF). Authorities from the ministry of mines were forced to intervene and it was discovered that we had been sold a dummy. We have no choice but to go away, but those that have invested on the claims are very bitter,â€ said another resident of Gweru.
Former indigenisation minister and MP for Shurugwi North, Francis Nhema, is accused of leading the fraudulent allocation of the claims. He could not be reached on his mobile phone.
The CID officer commanding the minerals section, Erasmus Makodza, said he needed to establish the situation. â€œThanks for alerting to me to this. I will phone around in order to establish what is happening,â€ said Makodza, who was recently transferred from the Police General Headquarters to lead the CID Minerals section.
Some bitter miners who are being kicked off the claims accused the mining commissionerâ€™s office of corruption, saying its officers had connived with the Zanu (PF) members.