Lexington Mujokoro, the son of former Highlanders and Amazulu midfield maestro Farai, is being tipped for a successful football future. 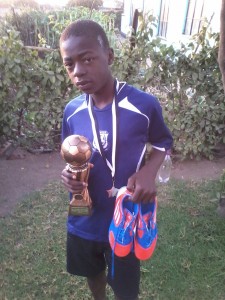 Lexington Mujokoro after his big win.

The younger Mujokoro, 13, who plays for FMSA Umguza junior team coached by former Bosso skipper Dazzy Kapenya and Abraham Mubaiwa, recently scooped the Thulani â€œBiyaâ€ Ncube and Friends Player of the Tournament award.
â€œThe young Mujokoro is a promising national asset whose talent should not be lost,â€ said former national team and Highlanders skipper, Thulani Ncube.
â€œThere were a lot of promising talents in our tournament, but that boy mesmerized all and should he be nurtured well, he will scale greater heights. We need to preserve such talent and make sure we do not lose it. I believe if we start building our future squad along people like him we will realise another â€˜Dream teamâ€™. I am happy he is under the good hands of former players who succeeded in their careers like Kapenya and Mubaiwa.â€
Mujokoro Senior was also confident his son would go far in the game. â€œI am impressed with his talent and commitment to the game. He has won a number of other awards that belie his age. Last year he was part of the Zimbabwe national Under 14 squad yet he was only 12 and won a medal. He recently won the Player of the tournament in the Bulawayo Province schools and also recently won the Sports Person of the Year award at Nkanyezi primary school, all great achievements for the young boy,â€ he said.
â€œI was talented and skilful myself, but the boy is in his own class and has attracted interest from clubs as far as South Africa, who have promised to take him through their academies and pay for his education.â€
Lexington told The Zimbabwean that he got his inspiration from his father. â€œBeing a player of the Thulani Ncube tournament was a great honour for me. It was a career achievement to be rewarded by Ncube himself,â€ he said.
â€œWinning that big award among more than 50 boys motivated me to work harder to be a great player one day. My father is also one of the reasons I am achieving a lot in my career. He is very supportive to me in whatever I need. I watched him play and that always pushes me as I want to carry forward his legacy. I want to surpass his standard and achieve more.â€