Hundreds of workers in Bulawayo on Saturday participated in the Zimbabwe Congress of Trade Union (ZCTU) organized march protests, registering their displeasure over the recent Supreme Court ruling which allows employers to fire employees by simply giving them three monthsâ€™ notice. 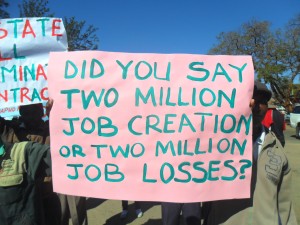 The march started in the morning at the Zimbabwe Congress of Trade Unions (ZCTU)â€™s regional officers along George Silundika in the morning before the demonstrators proceeded to Mhlanhlandela government complex where they left a petition outlaying their grievances.
During the march, the workers were dancing and singing songs denouncing the government and the judiciary. They were also wielding placards and posters lambasting the two for ruining the country.
â€œGovernment and Judiciary you have failed this country .Resign nowâ€ reads one of the placard.
The workers who were escorted by riot police dispersed peacefully soon after handing the petition. Post published in: Business