Lion killer Walter Palmer might have been a saviour to some poor villagers, rather than the devil incarnate, writes IAN SCOONES. 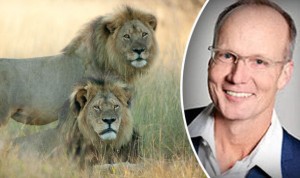 The Cecil story exposes some of the racial dimensions of the relationships between wildlife, land and hunting in Zimbabwe.

A lion called Cecil from Zimbabwe hit the world headlines last week. He had been shot by a dentist from the USA during a high-end cross-bow hunting trip to Gwaai Conservancy on the edge of Hwange National Park. A huge uproar has been generated.
Walter Palmer (the dentist) has been condemned by the general public, politicians, including the UK PM David Cameron, and countless â€˜celebritiesâ€™. The Zimbabwean government has demanded his extradition for trial alongside the landowner, one Honest Trymore Ndlovu, and the hunting guide, Theo Bronkhorst from Bushman Safaris.
Bronkhorst had helped bait the animal and draw it out of the park where it could be killed on private land, apparently without the appropriate quota. There have been calls for a ban on hunting, tough restrictions on trophy imports and a flood of money being pledged for lion conservation.
The whole episode is for me a fascinating lens into Zimbabwean land politics, and the relationship between humans and â€˜wildâ€™ nature, at the centre of debates about conservation and development.
Walter Palmer did not fit in with the conservationist view â€“ hunting and killing for pleasure is regarded widely with disgust, and the massive $50,000 fee seen as indulgent, arrogant extravagance.

Hunting revenues
Second, it raises questions about how hunting revenues can contribute to development. From the 1980s, Zimbabwe was at the forefront of an international movement away from a preservationist position on conservation to one that emphasised conservation for development through â€˜sustainable utilisationâ€™.
Hunting, it was argued could be seen as a form of management, as long as careful cull quotas were adhered to (apparently not in this case).
Alongside Cecil, many lions (presumably without names) have been killed in the past years as part of regulated quotas. According to Peter Lindsay and colleagues in a 2013 PLOS One article, the annual lion quota for Zimbabwe is 101 across 38,000 square kilometres of hunting area on a mix of land-use types.
On average 42.5 lions â€“ less than half the quota – were killed each year between 2008 and 2011, presumably due to the drop in hunting visits to Zimbabwe in recent years.
Along with other southern African countries, Zimbabwe pioneered an approach linking game hunting with development, and the famous CAMPFIRE programme from the late 1980s became a flagship, with hunting concessions offered on communal lands nearby parks and safari areas.

Dangerous predators
Around 90 per cent of CAMPFIRE revenues were from sport hunting. Funds were ploughed back into development projects with dividends going to the local community. CAMPFIRE did not always work as planned, and there have been many critiques, but the principle of making use of local resources for local development has been widely acknowledged.
While for Westerners lions are either Disney style characters in charge on the African plains or potential trophies to show off machismo and hunting prowesss, for many Africans living in areas near national parks, lions are dangerous predators and pests. They kill their stock, and sometimes people too. Last year there were a number of reports of lions terrorising people and their animals. Hunting as pest control is often valued, especially if the benefits are shared locally, and the hunting replaces the inadequate Problem Animal Control operations from the National Parks and Wildlife Agency. Walter Palmer might have been a saviour to some poor villagers, rather than the devil incarnate.
The Cecil story exposes some of the racial dimensions of the relationships between wildlife, land and hunting in Zimbabwe. The hunting business has a long pedigree going back to the establishment of hunting areas in colonial times. Hunting was always seen as central to the colonial conquest of taming wild Africa. Many white farmers turned their properties over to private game hunting reserves in the 1980s and 90s, sometimes as part of large blocks of land where the fences were removed, called â€˜conservanciesâ€™ , whichÂ  became the playgrounds of a rich, white elite.

Elite land politics
Unlike the CAMPFIRE arrangements, the benefits from conservancies to surrounding populations were minimal, beyond a few concessionary â€˜outreachâ€™ efforts. Cecil (and the name becomes more appropriate with this lens) is also about issues of race, colonialism and the control over land.
Fifth, the case however also reveals a new elite land politics in Zimbabwe. The extensive game ranches and conservancies were mostly subject to land reform in the early 2000s. Many of the former owners were evicted, along with their safari operations. But these lands, unlike many of the agricultural areas elsewhere in the country, were not handed over to land-hungry peasants or unemployed urbanites, but to elites.
For a time there was an argument that conservation areas were not to be part of the land reform, and that a separate wildlife-based land reform would be instituted. This was to be under the control of the Ministry of Environment, and not the Ministry of Lands, and so would guarantee the sanctity of the wildlife estate as a good source of revenue â€“ from hunting, but more especially tourism.

Zanu (PF) elite
However this soon got overridden by politics and many of the conservancy lands and other game farms were allocated as part of A2 (medium to large scale) land reform. And, as with a lot of A2 allocations â€“ and particularly in the conservancies that many assumed to be very lucrative businesses â€“ to well-connected elites. The list of â€˜beneficiariesâ€™ of some of these areas reads like a whoâ€™s who of the Zanu (PF) political-military elite.
Honest Trymore Ndlovu was one such beneficiary (a Mugabe â€˜land grabberâ€™ in some peopleâ€™s parlance). The new land owners in search of income from their land have hooked up with white safari operators. Some are legit and above board, sadly many are less so â€“ and Bronkhorst is allegedly one of the less reputable crowd. Wildlife is once again perpetuating a new elite land politics linked to wildlife, excluding wider populations from the benefits. This time itâ€™s with new (black) faces, but with many of the same unsavoury connections of the past, with links between politicians, poachers and hunting business entrepreneurs never far from the surface.
So what should we make of the sad demise of Cecil? Knee-jerk reactions resulting in bans on hunting or trophy imports will not solve anything. Indeed, past bans elsewhere have made things worse, with a rise in poaching, and decline in conservation protection. But while the posturing rhetoric about extraditing an American dentist dominates now, Zimbabweans should look harder at who benefits from wildlife.
If revenues are to be generated from hunting quotas (and I am a great supporter of this route to conservation), they should not just benefit a narrow elite â€“ a new pact between white hunters and their safari companies and the new politically-connected black elite, as exposed in the case of Cecil.
If Cecil and his other 100 odd fellow lions are to be part of a regulated hunting quota, and so creating a resource for development, then the conservancies and game ranches need to be opened up for wider use to generate broader benefit. Only then will the wildlife assets of the nation be properly shared and the habitats preserved for Cecil and his relatives.
Perhaps the outcry over Cecil can result in a proper wildlife based land reform, so such wildlife can benefit everyone, not just elites – black or white. – This post first appeared on Zimbabweland