The Hwange magistrates' court today adjourned the trial of a hunter accused of involvement in the killing of Cecil, the Zimbabwe world famous lion, to September 28. 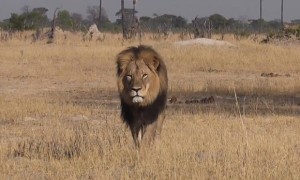 Cecil the lion in Hwange, Zimbabwe.

The state is accusing Theo Brockhurst a safari operator, of failing to stop Walter Palmer, an American dentist and trophy hunter, from illegally killing Cecil.

Palmer admits that he killed Cecil but says he is not guilty of any wrongdoing.

He recently killed using a bow and arrow and finished him off with a bullet 40 hours later.

The killing of Cecil has caused an international uproar and the Zimbabwean government is seeking his extradition from the USA to face trial in Zimbabwe.

Bronkhorst, who is out on bail, is yet to plead in court.

His lawyers requested for the postponement of the trial since an attorney who was meant to argue his case was not available and the defence needed more time to prepare for the trial.