EDDIE CROSS warns of a catastrophe looming at Kariba as it appears there has been excess drawing of water from the Dam for some time and the authorities are now reluctant to act in the face of an inevitable crisis. 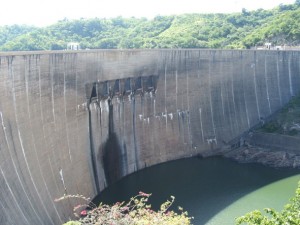 It is unlikely that the dam levels can be expected to recover much before February 2016, which could result in the power stations being closed completely – leading to severe power shortages in both Zimbabwe and Zambia.

Some two months ago the Zambezi River Authority in Zambia issued a warning that allocations of water to the power stations at Kariba would have to be reduced by a quarter to reduce the rate of draw down from the dam. The reason cited was the reduction in inflows due to poor rains in the upper Zambezi catchment. Figures from the ZRA show that the dam has fallen two metres since December and that water level have been declining steadily since then.
What is disturbing is that far from reducing the rate of draw down â€“ the water flow through the turbines in July actually rose by nearly 10 per cent. At present the rate of decline in water levels is such that the remaining 5 metres of usable water in the dam will be exhausted by December 2015.
In June, the ZRA said that power output at the two power stations located in the wall of the Dam would have to be reduced to 400 megawatts from their present level of 700 megawatts on the Zimbabwe side and from 1000 megawatts on the Zambian side. From 1700 megawatts to 800 megawatts â€“ a 50 per cent decline.

Disastrous
In Zimbabwe, which has a base demand of about 1800 megawatts and can only produce about 600 megawatts from its thermal stations on an unreliable basis, the loss of 300 megawatts of reliable, cheap, hydro power is a disaster. Even more so for Zambia who has to maintain supplies to the Mines which are the core of the Zambian economy and therefore the power cuts in all other sectors is even greater.
It would seem to me that the temptation to ignore the call by the ZRA to reduce output and therefore water drawings from the dam, has overruled logic and prudence and the power stations are maintaining their output even though it might lead to a disaster later in the year. It is unlikely that the dam levels can be expected to recover much before February with peak intake in May/June 2016; we could face a situation where the two power stations will have to be closed down completely leading to severe power shortages in both countries.

Under control?
Last week I spoke to the Minister of Energy and he expressed confidence that the matter was under control. I urged him to make a statement to the country on this matter as soon as possible. He said he would but did nothing while the House was sitting and I have seen no statement in the media.
To compound this situation we have just had a wet season that was seriously disrupted by shifting weather patterns caused by El Nino in the Pacific Ocean and perhaps the early impacts of global warming and climate change. All the evidence that is available to us today points to another poor season that is coming due to a strong El Nino.

Catastrophic
consequences
If that happens and we have a repeat of this past season, the consequences for the power station will be catastrophic. This year the lake levels did not increase at all over the peak inflow period and any repeat next year in the context of a lake that has declined to minimum draw down levels will mean that we might face an extended period of reduced or no power from the Kariba system which at present is our only reliable source of base load power supply.
Some four months ago I asked the Zambezi River Authority for details of rainfall and river flow in the upper Zambezi Catchment. In their reply they asked me to justify such a request and said that I should pay for the information. All I wanted to do was to satisfy myself of the facts behind the decline in lake levels at Kariba. I still have not had any response from the Authority and all the information I have has come from sources other than the ZRA.
The issue of how the Kariba Dam is managed is one of critical importance to both Zambia and Zimbabwe and as a public entity the ZRA is obliged to be transparent and accurate in making information available to all who want such information. I suspect that the Authority has been allowing excess drawings of water from the Dam for some time and is now reluctant to act in the face of an inevitable crisis.
If the above analysis is accurate then heads should roll. In the meantime at least the Zimbabwean Minister of Energy should make a clear and accurate statement on the situation that is developing at Kariba Dam. At the same time he should deal with the repair work being undertaken on the Dam wall and the pool below the wall.