Prominent Zimbabwean academic Knox Chitiyo believes womenâ€™s empowerment must be based on a win-win philosophy so that men embrace it too. He spoke to DORCAS GWATA, Director of Tribal Sands. 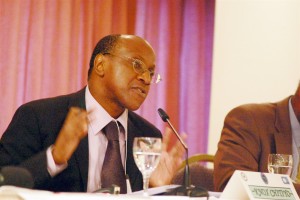 Knox Chitiyo: womenâ€™s empowerment must be a win-win situation.

Q: This year, The African Union put together an ambitious strategy for women empowerment across the continent and culture was identified as major risk factor. How can governments and grassroots programmes improve outcomes for women in Africa?
A: The AU strategy is really important and if implemented, will be crucial for Africaâ€™s development. I think it is important to conceptualise womenâ€™s development and womenâ€™s empowerment as a â€œwin/winâ€ for men and women. If it is seen as a zero sum game where one gender is empowered at the cost of another, then key stakeholders (both men and women) might try to block rather than assist the process.
It has to be seen as a partnership between men and women so that key grassroots stakeholders such as chiefs and other local leaders and heads of households etc are on board. Wherever possible, African governments and society must ensure that every child receives an education. No child should fail to go to school because they did not have school fees.
I believe that this should be made law across the continent. Empowerment is a dual process of cultural dialogue with the grassroots and of having change agents who can move things along through dialogue and action.
Changing cultural beliefs and practice is never easy eg FGM but through education, dialogue, offering better alternatives and practical incentives it can be done. This means small, incremental changes as well as occasional big leaps done at local, national, regional, continental and global level.
Bear in mind though, that in many African societies, women historically have played a major role (matriarchal societies) so itâ€™s not always about reinventing the wheel. But it is definitely important to inculcate the values of equal opportunities /equal reward for women and to encourage women to strive for success.
Education and health are crucial in this. Also, Africa needs to do more to protect civilians during conflicts. Females are particularly vulnerable to rape and other crimes during war and Africa really has to push both for protection of civilians, and for justice for those who suffered war crimes.

Q: The Ebola crisis wreaked havoc and tested Africaâ€™s health care systems, including our own in Zimbabwe. What can African governments do more to strengthen their health care systems?
A: Iâ€™m not a health care expert by any means but I think a key starting place must be for African governments to prioritise and invest more in the health sector when it comes to national and regional budgets.
This doesnâ€™t just mean throwing more money at health â€“ it also means having a more joined up approach to health care. Nor does it mean that we have to be entirely negative.
Health care systems in Africa face huge challenges for sure- eg â€œbrain drainâ€ of doctors and nurses; lack of equipment, medicines and facilities in many areas etc etc. But African countries do have dedicated health care workforces+ local knowledge, which counts for a lot. And Nigeria has won plaudits for their quick response to Ebola there. So there are a number of things which can move things forward- joined up strategies for health care systems; more â€“ and better thought out- investment; public/ private partnerships; learning from Africaâ€™s health sector success stories re best practice etc .
I think that the other big challenge lies in encouraging school leavers to train as nurses and doctors. A lot of youngsters would rather go into finance or engineering or other sectors which hold the promise of a quicker financial return.
For our parents and for our generation, there really wasnâ€™t much need to incentivise people to be health professionals because it was prestigious and a dependable income for life. But now itâ€™s not just the challenge of retaining health care professionals in- country; thereâ€™s also the challenge of getting the young into the profession in the first place when they have so many other career options competing for their interest.

Q: Your father was one of the first black Zimbabwean doctors to co-own a blood centre in Zimbabwe, how much of your career and life been shaped by your father?
A: Yes, dad was one of the first generation of black medical doctors in the then Rhodesia in the late 50â€™s and early 60â€™s. He was the first black pathologist not just in the country, but also in the region. But I would say that Iâ€™ve been influenced by both my parents.
My mom is an achiever in her own right too – she was one of the first generation of black matrons and senior personnel at Harare and Parirenyatwa hospitals and also in the Ministry of health. So my parents influenced myself and my sister Cathy who is also an achiever, in numerous ways – Iâ€™ll only list a few.
For me, one of the things he taught me was to know and embrace our family history both in terms of the distant past and also the more recent and contemporary.
Both my parents were extremely well read, especially dad who had a really good library at home. He didnâ€™t just read medical books â€“ there were novels and many other types of books too. So I guess thatâ€™s where I developed an initial fascination with books and reading. And both my parents were well spoken too â€“ they had worked hard to uplift themselves.

Q: The world was outraged with the recent â€˜Cecil the Lionâ€™ story. Others views were that we should be concerned about the every day life ordinary Zimbabweans. Do we have our priorities wrong or should we as Africans treasure our wildlife and resources more?
A: A bit of both I think. For sure, Zimbabweans have more pressing issues to contend with such as daily sustenance; but as Iâ€™ve pointed out elsewhere, wildlife and environmental conservation is part of a value chain which ultimately benefits us all. Through tourism and appropriate land use it provides incomes, shelter and other benefits. The Cecil saga also put the spotlight on the challenges and opportunities for Zim/African tourism
and conservation. With South Africa hosting a big international wildlife summit next year itâ€™s actually been quite useful publicity. Although I feel sorry for Cecil for the amount of â€ looney tunesâ€ social media rants which have been done, supposedly in his nameâ€¦
(Dorcas)Dr Knox Chitiyo, thank you for talking to me on Tribal Sands.
(Knox) Well I do have to say a huge thank you to family and friends and everyone who has helped me along this journey. And to you, for the opportunity to speak.
Look to the future but always be confident of who you are and where you came from. And real success is about empowering others

Biog – Knox Chitiyo
Knox Chitiyo is Associate Fellow at the Royal Institute for International Affairs Chatham House in London. He is also Chair of the Britain Zimbabwe Society. In 2010, Knox won the BEN/SKY TV Diplomat Award. In 2014 he was included in Diaspora Magazineâ€™s UKâ€™s Most Influential African Diasporans. He can be contacted on
[email protected]

Biog – Dorcas Gwata
Zimbabwean writer and news analyst Dorcas Gwata has been nominated for the Zimbabwe International Women Award Blogger of the year 2015, a prestigous platform that acknowledges Zimbabwean women’s contributions at home and abroad. Dorcas’s blog focuses on the positive narratives of the African story, health and travel. She has interviewed prominent figures such as fashion designers and Dr Knox Chitiyo a leading figure in the Zimbabwean Diaspora. Her blog is www.tribalsands.org