Pupils in the impoverished, rugged district of Gokwe North have been liberated from chalk and talk because everything in life is now digital, reports REGINA PASIPANODYA. 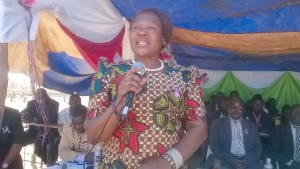 World Vision Zimbabwe has donated an E-Learning facility to Chomuuyu High school in Gokwe North in the Midlands Province last week under the theme: Mainstreaming 21st century teaching and learning.
The Chomuuyu E-Learning research and resource centre aims to benefit all the schools from the four political wards in Gumunyu District.Â  The district is characterized by rugged terrain, poor roads and very poor telecommunications infrastructure. According to World Vision the school was chosen on the basis of its location in the Area Development Programme â€“ it is central and accessible from all corners. It also has electricity.
In an exclusive interview with The Zimbabwean, Programme Manager Gamuchirai Sayafa said the project was funded through the bounce back funds, which were donatedÂ  through the sponsorship project.
“Bounce backs are monetary donations that are contributed by sponsors in celebration of birthdays for children registered in the project,â€ he explained.

16 computers
ProjectÂ  Manager Elias Dodo said the bounce back funds for this project amounted to $22,036. “E-Learning consumed $18,771, which included 16 computers,Â  20 computer desks, 40 chairs,Â  two teacher’s tables and chairs as well as a generator for electricity backup and a projector, “he said.
The remaining $3,264was used to purchase stationery, which was distributed to vulnerable children, who each received 10 exercise books.
Since 2000, the funds have been used to throw birthday parties for sponsored children.Â  “However, World Vision realised that throwing parties for children was good but not good enough,” said Dodo. â€œThe committee was selected to decide what is best for the children and they chose the E-Learning resource Centre.”

World is digitalised
The Bounce back chairperson and Headmaster of Chomuuyu High school,Â  Elliot Mlambane, said the project would enhance quality education through the availability of learning materials to both pupils and teachers.
“The world today is digitalised.Â  We want to liberate our children from chalk and talk because everything in life is now digital,” he added.
The head boy and lower sixth form student at Chomuuyu,Â  Edmond Chivende (18),Â  thanked World Vision for coming to their rescue.
“I am very optimistic that our school and also other schools in Gumunyu district are going to improve in pass rates,â€ he said. “We never had resources. We relied on old textbooks, which was a disadvantage for school pupils – especially at the senior levels. The MP for Gumunyu Constituency, Melania Mahiya, also expressed gratitude to World Vision for the job well done in their district.
“World Vision is still striving to improve the livelihoods of the Gumunyu community by 2022,” said Mahiya.
She urged the locals to support and work together with the project. “It is very sad that most parents in Gumunyu do not care about their children’s education,Â  because they refuse to pay schoolÂ  fees,â€ she said.