Emelia Gacha, 40, from Budiriro knows no other â€œofficeâ€ outside the dusty corner on a pavement a stoneâ€™s throw away from the Harare Central Police Station. 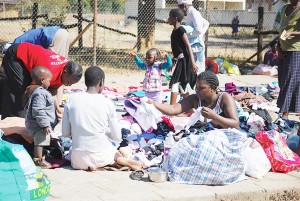 An estimated 18,000 people have been sacked in the wake of last monthâ€™s Supreme Court ruling â€“ swelling the ranks of desperate vendors who flood the nationâ€™s streets.

Except when she got sick or went to attend a friendâ€™s or relativeâ€™s funeral, Gacha has been coming to her vending space on a daily basis for the past 18 years.
It seems all the people who work at nearby offices, among them Zimbabwe Revenue Authority (Zimra) and police officers who come to buy her biscuits, sweets, cigarettes, airtime and bottled water know her too well.
They affectionately call her â€œMai Panoâ€ for her signature slogan â€œSvikai pano!â€ which is Shona for â€œcome and buy from hereâ€.

My office
â€œThis is my office and I have raised four kids working from here. Just as other people put suits to go their offices, so do I don these humble clothes and apron to my own type of office,â€ Gacha told The Zimbabwean.
A widow with four children to look after and the first one of them about to complete a purchasing diploma at the Harare Polytechnic, she has seen vending business in the capitalâ€™s central business district grow to the present teeming numbers.
â€œWhen I decided to start vending after my husband suffered a stroke, there were not many of us and competition was not so stiff,â€ she added.
Today, scores of other women, men and teenagers have crammed themselves on the same pavement and business is low. Every day, they play hide and seek with municipal police officers who confiscate their wares and force them to pay a fine at the bustling police station.
Government is battling to remove Gacha and hundreds other vendors from central Harare to spaces identified on the outskirts of town, but they have vowed to stay put and continue with their daily struggle from there.

Land barons
â€œThis is my office and the municipality and police can do whatever they want with me and my wares, but I am going nowhere!â€ she vowed.
Municipal staff and self-designated land barons have been moving around urging the street hawkers to accept vending cards and move from the city centre after government clamped down on them. Some have moved but the majority has remained defiant even after numerous clashes and arrests.
Said Stella Ncube, 32, who sells vegetables close to a municipal office in the same area as Gacha: â€œWhat is the point in going to a place where people wonâ€™t come and buy? The zones that they (government officials) have said we must go to are too far away.â€
In any case, the new vending sites are not developed and the little space that some have moved to just outside the city is too small.
To make matters worse, municipal officials are grabbing most of the stands and subletting them, according to a recent statement by the Zimbabwe Informal Sector Organisation (ZISO).

Ironic and tragic
In an interview, the ZISO director, Promise Mkwananzi, said corruption was adding to the woes of the vendors. â€œIt is ironic and tragic that the vendors who are struggling to make ends meet are being preyed upon by greedy officials.
â€œMunicipal police have been pressing the vendors to pay bribes so that they are not arrested or tend to consficate their wares, severely affecting their business,â€ said Mkwananzi.
He added that the recent forced evictions of street vendors had thrown some of them out of business. But despite these struggles, the vendors would rather be on the streets than go back to starving families.
A used clothes trader operating on the Town House perimeter fence said he was not realizing much from daily sales, but at least ended up with a few dollars to help care for his family in Mbare, a populous low-income suburb.
â€œThere are not too many people selling second hand clothes and business is extremely poor. There are days when I fail to sell a single item but if I stopped, what would I do?â€ said Timothy Musira, 38.

Mysterious fire
On average, he said, he takes home $5 dollars to add to whatever his wife, a vegetable vendor at Mbare Musika gets from her own small enterprise.
Municipal officers regularly raid his space and either demand bribes or just take away his wares.Â  His business was severely affected recently when, during the battles with municipal officials who were trying to force them out of town, his bales of clothes were burnt alongside other vendorsâ€™ in a mysterious fire.
Independent estimates show that Zimbabweâ€™s unemployment rate is well above 80 percent. Since 2000 when the Zanu (PF) government embarked on a fast track land redistribution exercise that forced off some 5,000 commercial white farmers, industry has drastically gone down and the majority of companies have either closed shop or are battling to survive.
The situation was worsened by a recent Supreme Court ruling that empowered employers to lay off workers by merely giving them notice and no retrenchment packages. An estimated 18,000 people have been sacked in the wake of the ruling that was made last month.
â€œSome of the people who were fired have already joined us on the streets, but the truth is that we are now squeezing water out of stones due to stiff competition,â€ added Musira.
He added: â€œSelling in town is better than in the suburbs for the majority of us because many people come here.â€
John Robertson, an economic consultant, said it would be difficult to remove the vendors from the streets because the prevailing economic crisis was pushing them there.
â€œFor as long as the economy is doing badly and jobs are being lost, more and more people will be looking for livelihood opportunities by selling on the streets,â€ said Robertson.