Whenever you see mbira or marimba musical groups churning out melodious tunes and performing at public functions, chances are that the instruments being played have at some point, passed through the crafting hands of Nkululeko Ndlovu or his late father, Elliot Ndlovu. PAMENUS TUSO reports. 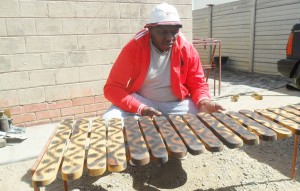 Ndlovu Jnr and his late father established Nongoma Marimba and Mbira Manufacturers in July 2003 after his father retired from the United College of Education (UCE) in Bulawayo where he had worked for many years as head of the music workshop.
The older Ndlovu started learning to manufacture mbiras and marimbas at the college in 1968 under the instructions of renowned local and international musical instrument makers such as Josiah Mate, James Jake and the late Olof Axelsson. These international musical instrument makers also introduced him to several innovations in order to give the instruments a more traditional look and sound.
Following his retirement, Ndlovu Snr and his son started their own traditional musical instruments manufacturing company at his house in Luveve high density suburb in Bulawayo.

Humble beginnings
From humble beginnings, father and son and good friend, Bheki Moyo, have been transforming wooden boards, fibreglass and lengths of plastic and metal tubing into neat, attractive and innovative musical instruments.
Sadly the older Ndlovu passed away in 2006 before he could fully enjoy the fruits of his labour and his dream. Following his father’s death, Ndlovu Jnr took over and has grown the company from strength to strength.
â€œMy father continues to guide and inspire me spiritually. The number of our customers has grown significantly over the years. When we started the company, we did not have full time employees and now we have four permanent employees,â€ said Ndlovu (35) in a recent interview.

Exports
The company now also counts delivery vehicles and a wide range of machinery and equipment among its assets. Although the companyâ€™s flagship remains the marimba and mbira, Nongoma Marimba and Mbira Manufacturers also produce a wide range of traditional drums and percussion instruments.
â€œWe sell locally, but are pleased to advise that most of our products are exported to Europe where both the marimba and mbira are becoming more popular. The instruments are also popular in schools and community groups in Botswana, South Africa, Scandinavia and the United States,â€ said Ndlovu.
Some of the local and international clients include local schools and musical colleges. One of the major international customers for the company is Francistown Electronics. The University of Ethno Musicology in USA has also been a loyal customer. A six piece set of marimbas sell for $2 600 and a mbira costs $90.
According to Ndlovu, he and his employees are capable of producing more than five mbiras per day.
â€œDemand for my instruments is high. I have made mbiras for prominent musicians like Oliver Mtukudzi and the late Chioniso Maraire. I inherited all my skills from my late father,â€ he said.

Vandalism
Ndlovu, who is also an accomplished marimba and mbira player, supplied Bulawayo City council youth centres with marimbas.
â€œSome time ago, I entered into an arrangement with the city council by which I supplied them with 28 sets of marimbas for distribution in Bulawayo centres. The idea behind this gesture was empowering the youths with music by keeping them occupied. Unfortunately this was not truly appreciated and I am very disappointed to report that the instruments have been vandalised at most of the centres,â€ said Ndlovu.
Ndlovu, who is a father of three, has travelled the country and the world conducting traditional musical instruments making workshops and seminars. His immediate future plan is to start his own traditional musical instrument-making college to pass on his expertise and skill to the next generation.