Widespread poverty has forced people to look for cheap medication on the streets, and unlicensed drug vendors could kill thousands of people, reports RUZVIDZO MANDIZHA. 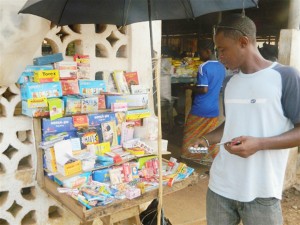 Street vendors have been selling counterfeit medication since the healthcare system began to disintegrate in the 1990s.

Bubble-wrapped pillsÂ  are scattered across the crude table in a busy open air street market beside crumpled boxes of lightening creams and other remedies – movet, diprison, sexpills, paracetamol and anti-fungal powder.
A young man approaches in company of a girl and whispers a few words. The vendor shuffles through the piles of sexual aids that cover the table – generic viagra, dubious-looking condoms -before cutting a section containing two antibiotic capsules off a sheet of pills.
He hands them over, collecting in return 50 cents. Such vendors ply their trade on the streets of every city and town, selling pharmaceuticals, often counterfeit or substandard, at reduced rates.
Some strides have been made over the past few years to ensure drugs are safe and effective, but medical practitioners still cite the sale of substandard and counterfeit drugs as one of the largest obstacles in their fight to save lives.

From Botswana
Pharmacies are regulated under the Drugs Act. Enforcement has been stepped up substantially in recent years, but what to do about those vendors on the streets remains elusive. Vendor Ben Shoko says the majority of his supply comes from Botswana, where drugs are sold at cheaper prices and easily smuggled in through Zimbabweâ€™s infamously porous borders.
At other times, he buys them from local retailers. Heâ€™s been selling since the healthcare system disintegrated in the 1990s – paving the way for expensive clinics, available only to the moneyed few.
Another vendor, identified only as Keti,Â  who plies his trade at Mupedzanhamo market, said he had never had a complaint about his products. He recommends drugs and explains to his customers how to take them, although he canâ€™t read most of what is written on the packaging.
Keti says police frequently harass vendors. Occasionally, authorities seize his drugs and arrest him. Sometimes he even goes into the police cells for a while.

Survival
â€œBut there are no job opportunities, so even if we are arrested, weâ€™ll start selling the drugs again when we are released,â€ says Keti. â€œWe are doing this to survive.â€
According to the latest Zimbabwe Pharmaceuticals and Healthcare Report, the outlook of modest growth for Zimbabwe’s pharmaceutical sector should be treated with caution as poor monitoring and recording practices, along with the country’s reliance on aid from various sources, make market figures unreliable.
The report adds that pharmaceutical spending will be driven mainly by imported medicines with demand owing to a high communicable-disease burden. However, low purchasing power, a declining economy and ongoing political tensions pose high risk and uncertainty for the market, deterring multinational drug makers.

Mafia
The borders between countries are porous, allowing traffickers to move supplies in with relative ease, and customs and border officials are poorly paid. It doesnâ€™t take a large percentage of profits from a lucrative drug trade to convince someone to overlook a few cartons of packages of what is supposedlyÂ  penicillin. A council police officer responsible for enforcing the law spoke to us on condition of anonymity. â€œItâ€™s a mafia, they just pay the monies and go back to the street and sell. Tougher penalties are the only way we can really change,â€ he said.
Paul Gomba, a pharmacy technician at Harare Hospital, says many of the drugs for sale on the streets are substandard or fake. â€œItâ€™s a regular occurrence in the hospital for staff to notice that patients will buy their medication outside the hospital for cheap prices, instead of at the pharmacy on the premises, where drugs are sold on a cost-recovery basis,â€ he said.
Investigations reveal that the drugs patients are buying on the streets arenâ€™t what they should be. The dangers of substandard and counterfeit drugs are many, says pharmacist Brian Gomo, who is employed by the Red Crescent Society Clinic of Iran in the central business district of Harare.
For example, fake antibiotics lead to worsening infections and complications, while substandard antibiotics cause drug resistance. â€œDrug vendors either give the wrong dose, give the insufficient dose so it will have no effect, or give an overdose,â€ says Gomo. â€œThey can kill thousands of people.â€

Education
While education campaigns seek to inform the public of the risks of fake or substandard drugs, poverty gets in the way. Vendors often offer lower prices and will sell a single dose, rather than having to buy a course of treatment all at once. â€œVending is directly poverty related,â€ says Gomo. â€œItâ€™s a social issue of survival.â€
According to independentÂ  economic analysts, our nationâ€™s formal industry has all but collapsed and unemployment is around 90 percent.
From the vendors on the street to the patients buying their products to the people smuggling cartons of weak amoxicillin through the jungle, crippling poverty means millions of Zimbabweans can only afford to live on $5 â€“ and can never afford the $50 being charged in formal clinics and hospitals.