The GMBâ€™s failure to pay farmers on time is haunting rural schools, whose operations have been hamstrung by parentsâ€™ incapacity to pay fees. 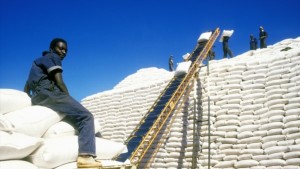 An informal survey by The Zimbabwean revealed that most rural breadwinners had school fees arrears from last year. â€œWe have been submitting our grain to GMB yet we are not receiving payments. How then can we pay schools fees? As it stands, we are barely surviving on a daily basis following this yearâ€™s drought. We have been receiving promises from the GMB depot manager here that we would soon get paid there is nothing,â€ said Joseph Kwangari, a village head from Shurugwi North district.
He has three children attending a local primary school and two others in secondary school – but he has not paid a single cent for more than a year. â€œI could have settled my arrears with the schools if GMB had paid me my money,â€ he said.
Shurugwi suffered extremely poor harvests, just like most of the areas in the Midlands, Masvingo, Mashonaland East provinces as well as southern parts of the country. According to the US-based Famine Early Warning System Network (FEWSNET), food insecurity is severe in southern parts of the country.
Kwangari revealed that a man from his village recently approached the GMB depot at the Tongogara business centre and threatened to kill himself in front of depot staff. The staff called the GMB offices in Harare â€“ and he was subsequently paid his money. The move, said other villagers from surrounding communities, had led them to believe that GMB was just neglecting paying them and had the money to do so.

Operations crippled
In Wedza, a senior school teacher who spoke on condition of anonymity said learning had severely been affected by non-payment of fees. â€œWe need to build three more toilet blocks to replace the ones that have been filled up but we canâ€™t do so if the parents are not paying fees. In addition, we have to buy stationery, repair damaged windows and doors and more furniture.
â€œThe majority of parents say they will only pay when they get their money from GMB and in a way you can understand their plight. Non-payment of fees has crippled our operations and there is no way in which we can expect good results under these conditions,â€ said the senior teacher.
The situation has drained the morale of teachers some of whom have already have left for neighbouring countries, while others have transferred to other schools.
The GMB deputy general manager (finance and administration), Joe Muzurura, told parliament in June that his organisation was financially hamstrung and owed workers some $17 million in salary arrears. It owed farmers $26 million from 2012, of which $9 million was for the current season. Last year, GMB made headlines when it offered to pay its workers with cereals instead of money.
John Robertson, an economic consultant, said the GMB lacked the capacity to pay farmers. â€œThe grain utility is a victim of mismanagement, corruption and excessive interference by politicians and government officials. Farmers must be empowered to sell grain to other merchants, for as long as those traders do not rip them off. GMB is in terminal decline,â€ he said.
Teachers and villagers also complained that children were dropping out of school because of hunger.