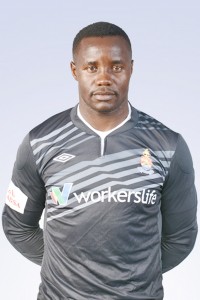 This follows revelations that University of Pretoria have opened up negotiations regarding the extension the agile goalkeeper, who has been consistent since he joined Absa Premiership side from Dynamos about three seasons ago.
So pivotal has Arubi been to the AmaTuks that he has been rewarded with the clubâ€™s player of the season award, made team captain and won himself a branded glove from a local label â€“ all during his first contract in South Africa. The player, who also starred for Lancashire Steel and Highlanders back home, is in the final year of his contract with the capital club, which is in fact an optional year on his contract that was exercised by the club, as penned in the deal which saw him join in 2012.
Having missed out on only three of the 99 official games the side has played since he joined, the 29-year-oldâ€™s value has grown massively, as he now holds the record for most appearances in the clubâ€™s short history in the PSL. Michael Hughes of MSC Sports, who represent the player, recently confirmed to the SA media that negotiations had started.
â€œWe have started negotiations with AmaTuks with regards to extending Arubiâ€™s contract with the club, which is in its last year,â€ said Hughes earlier this week.
Arubi kept eight clean sheets in the 29 League matches he played last season, as AmaTuks finished 13th in the Absa Premiership log standings.
His agility saw him achieve another milestone last season, when he became the only PSL player to have featured in every minute of their outfit’s campaign.
In 2012, the Zimbabwe Warriors shot stopper was crowned the best player at club level, but should have looked with envy as his Kaizer Chiefs counterpart, Itumeleng Khune, grabbed almost everything on offer in the leagueâ€™s overall crowning ceremony.
â€œI also want to be the leagueâ€™s Goalkeeper and Player of the Season at some point. I have done well and gained a lot of experience playing here since I arrived at the AmaTuks,â€ said the goalkeeper.