Harare - MDC-T has dismissed as a hoax a Facebook page purporting to be managed by Elizabeth Macheka Tsvangirai, the wife of its president. 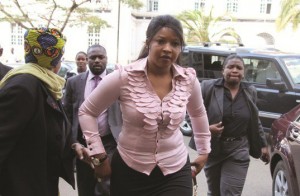 In a statement, the presidential spokesperson and party director of communications, Luke Tamborinyoka, said the page was not official:

â€œWe note with concern the creation of hoaxÂ Facebook page under the name of Elizabeth MachekaÂ Tsvangirai.
â€œWe wish to place it on record that the page is fraudulent as Mai Tsvangirai is not on Facebook. Someone is maliciouslyÂ trying to abuse the name of the wife of theÂ MDC leader by posting purportedÂ internal party information,â€ he said.

In one of the posts the page made malicious remarks against a top party member, Theresa Makone who is the treasurer general.

â€œIf the recent trip to the UK (by an MDC-T team) is anything to go by it has fermented divisions in the already factitious opposition party. Information reaching us is that MDC-T Mwonzora and Treasurer Makone are at loggerheads over the recent funds raised at a dinner dance in the UK.

â€œMwonzora who amassed extra funds at a lecture where he was charging 10 pound entry fee is said to have gone on a shopping spree that left Makone awe struck after having been cozy with each other the whole journey.

â€œIn a bid not to be outdone a belligerent Makone demanded control of the funds a move that was vehemently opposed by Mwonzora. The two are alleged to have sat separately on the plane and never spoke on their way back. Makone is said to be planning a purge aiming at Mwonzora who is already scandal ridden and faces a litany of criminal charges some of which are still pending in the courts,â€ read the post.

â€œEven under normal and ordinary circumstances, Mai Tsvangirai has nothing to do with MDC administration and can never purport to have any internal party information on anything of the party, let alone finance issues.
Tamborinyoka said his party was pursuing all options to determine the online fraudster.

Tsvangirai has in the past attempted to ban his members from participating on social media platforms.