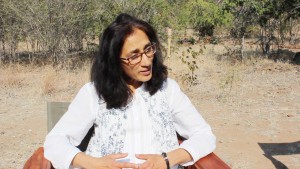 Nighat Hasnain -To adopt the concept in UK and Pakistan.

The Africa Centre for Holistic Management (ACHM) is working with communities and other NGO’s in the arid region of Chivi in Masvingo and Debshan Ranch in the Midlands to restore degraded land and increase crop yields.
The programme follows on the heels of the successful implementation of a holistic management programme on the Hwange communal lands,
ACHM is a local, regional and international non-profit organisation founded in 1992 by Allan Savory, a locally born ecologist, following lengthy research to find solutions to land deterioration and the human impoverishment that has resulted from it.

Land restoration
Through a unique but simple planning methodology, the centre has become an epitome of land, water and wildlife restoration using large livestock herds, not only in this country but across the globe.
The methodology basically involves combining of all livestock in an area into large herds. The herds then harness the power of their hooves to break up hard ground so that air and water can penetrate the earth. The livestock also trample old grass to cover the soil, making it less prone to the drying effects of the sun and wind.
â€œWe are planning to introduce holistic management in Chivi, a very dry area with little animal forage and poor rainfall. We are vigorously exploring the idea of villagers bringing together their livestock and then using these herds to bring back lost biodiversity in the area,â€ said Rufaro Kafera, a programmes officer with Plan International.
He said his organisation was already working with the Chivi community by empowering them on how to effectively manage the programme.
Mupenyu Mberi, a manager at Debshan Ranch in Shangani said in partnership with the surrounding communities, they had recently introduced holistic management.

Mobile paddocks
â€œOur ranches and the local communities have adopted a grazing plan that enables the animals to spend specific periods in one mobile paddock before they are moved to another. The cattle stay in these mobile enclosures and are moved every seven days,â€ he explained.
After seven days, the cattle are relocated by well-trained herders to a new area where they are used as another land restoring tool.
Mberi stressed that this strict grazing plan was aimed at improving land health and ensuring that both livestock and wildlife had adequate forage all year round. Cattle dung and urine also helps to enrich the soil.

International interest
Following the introduction of the concept, grass and plant growth has improved drastically.
The centre’s holistic management model has attracted international attention. â€œACHM centreâ€˜s model of holistic management is a good practical way of addressing issues of land degradation and water rehabilitation. I am hoping to apply this principle to my land,â€ said Nighat Hasnain, a UK-based lands and water resources consultant.
She is also keen to introduce this holistic management principle to her native Pakistan where land degradation is a serious issue. Hasnain was part of a powerful team of over 70 scientists from around the world who recently visited the centre to study its activities.
Since its inception, the centre has also reached many more communal farmers indirectly through its Holistic Land and Livestock Management Community Facilitator Training programme.
Under this project, close to 100 facilitators from organisations within Zimbabwe as well as from Botswana, Zambia, South Africa, Namibia, Madagascar, Burkina Faso, Niger and Somalia have been trained.

Prize winning innovation
In 2010 the centre won the annual international Buckminster Fuller Challenge. The award carries whopping prize money of $100,000 and recognises organisations that support the development and implementation of strategies that have ‘significant potential to solve some of humanityâ€™s most pressing problems’.
In 2014 the organisation won the Humanitarian Water and Food Award (Denmark) as a ‘leading edge innovator in food security’.
ACHM is governed by a board of Trustees whose responsibility is to formulate policies for the organisation. The board, which is also responsible for fundraising activities, comprises theÂ  five chiefs of the Hwange district, who represent approximately 245,000 people living in Hwange communal lands.
After founding the centre, Savory donated one of his farms to the locals for the purpose of furthering holistic management.
Two other A1 and A2 farms, Bosweden and Sekebelo, make up the ACHM, whichÂ  also houses the Dimbangombe College of Wildlife, Agriculture and Conservation Management. The college is part of the Kavango Zambezi Transfrontier Conservation Area – home to a sizeable wildlife population including elephant, lion and buffalo.

Grass bank
The owners of the livestock are the ACHM NGO, ACHM staff members and farmers within the Hwange communal lands, who take advantage of the ‘grass bank’ for animals that have run out of forage.
The only requirement for cattleâ€™s admittance to the ranch from the local communities is that they should arrive in good condition. Livestock near starvation in the past have succumbed to death due to the stress of being moved around on the vast ranch.
Following the introduction of this concept, the lives of this community have drastically improved. In Sianyanga village, the community had water problems because their boreholes were drying up, the land was degraded, there was no grass for livestock and crop yields were declining. The earth had developed a hard surface and when it did rain the water run-off ended up as silt in the local Nalomwe river.
The community had to move livestock 15 km to Gwayi river, where they camped for most of the dry season.
â€œWe now plan our grazing. Our animals spend specific periods in a paddock before they are moved to another one. Unlike in the past where cattle travelled longer distances to get water, our animals are now healthier because they get enough water and grass,â€ said Balbina Nyoni, a communal farmer in Chief Nelukobaâ€™s area.
As a result of this practice, which has obviously improved soil aeration, water penetration and seed germination, most rivers in the area that had ceased to flow have started to flow again.
Desertification or land degradation has destroyed many communities globally.