Botswanaâ€™s President Ian Khama should use his tenure and leadership position as chairperson of the Southern African Development Community (SADC) to prioritise finding solutions to the human rights crisis in the region, said Amnesty International. 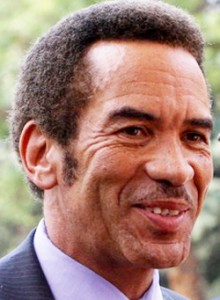 The most pressing issues President Khama should address as he takes over the position from President Mugabe today include the ongoing suppression of dissent in Angola and the killing and torture of police and soldiers accused of leading a mutiny in Lesotho.
â€œWe are seeing a worrying picture of shrinking space for human rights in many countries across the SADC region. We are also seeing the targeting and persecution of human rights defenders,â€ said Deprose Muchena, Amnesty Internationalâ€™s Director for Southern Africa.
â€œAs the leader of SADC, President Ian Khama must work with his fellow regional leaders to try to find durable solutions to the human rights crisis during his term.â€
Angola
In Angola, police are increasingly clamping down against those speaking out against restrictions on freedom of assembly, association and expression and the lack of accountability in the country.

On 21 June 2015, at least 15 activists were arrested in Luanda where they were attending a meeting to discuss human rights violations and governance concerns.
Lesotho
In Lesotho, an attempted military coup in August 2014 led to the deaths of police as well as attacks on the homes of government officials, threatening the countryâ€™s human rights climate.
Former military commander Maaparankoe Mahau was killed on 25 June 2015, allegedly by members of the Lesotho Defence Force.
Swaziland
In Swaziland, authorities are actively using the 2008 Suppression of Terrorism Act (STA) and the 1938 Sedition and Subversive Activities Act (SSA Act) to intimidate activists, further entrench political exclusion and to restrict the exercise of the rights to freedom of expression, association and peaceful assembly. Fourteen people are currently charged under these laws in five separate trials.

Zambia
Zambia must criminalise torture and repeal the Public Order Act which is being used to limit the freedom of expression in the country.

Zimbabwe
Zimbabwe has failed to align its laws with the 2013 constitution, allowing police to revert to old tactics to intimidate protesters.

Peaceful protesters have been brutally beaten by police and the whereabouts of journalist and known critic of President Robert Mugabe, Itai Dzamara, remains unknown after he was disappeared on 9 March 2015.

â€œPresident Ian Khama must use his new role as SADC chair to put pressure on the leaders of countries where human rights violations and abuses are prevalent to embrace in words and indeed SADCâ€™s commitment to human rights,â€ said Deprose Muchena.

â€œHe should encourage them to show respect for human rights within their borders and appeal to other SADC leaders to ensure that member states that fail to respect human rights are fully held to account.â€
In the face of increasing human rights violations across the region, Amnesty International is calling for the reinstatement and full effective and independent functioning of the suspended SADC tribunal. The tribunal provided individuals and legal representatives of victims of human rights violations access to seek remedies and justice.
SADC Heads of State suspended it in August 2014 without any consultation or justification.
For more information or to arrange an interview please contact:
Robert Shivambu, Press Officer â€“ Amnesty International – Southern Africa on +2711 283 6000 or +27 83 437 5732 or [email protected]