International Master Rodwell Makoto is the winner of the 2015 Chess championships held at Ambassador Hotel from the 8th-11th of August. 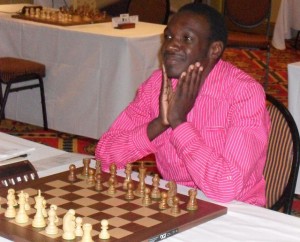 He only drew his first game against Castro Sibanda in the first round after coming late from SA. He routed all his ooponents after the first draw shrugging some stiff competition from Spencer Masango, Emerald Mushore, Kudakwashe Sibanda, and Elisha Chimbamu.
Mokoto who has been doing well even in international events is now needing 3 norms to be Zimbabwe’s first ever Grand Master. He has upped his game so well that he swindled his opponents at ease such is the experience that Makoto got from these events. He came 4th at the CUCA tournament in Angola finishing with 5,5 points.For the National chess championships he finished with 10,5 points out of 11 games. Spencer Masango and Kudakwashe Sibanda were tied on second position with 8 points followed by Emerald Mushore the former National champion who was 4th with 6,5 points.
Elisha Chimbamu and Lloyd Moyo finished with 6 points. They were fifth and sixth respectively. Lewis Kahoba, Heath Darare and Castro Sibanda had 5,5 points and they came 6-9 respectively. Gift Sithole wastenth. He defeated Castro Sibanda and Emerald Mushore in some very interesting games which showed some good understanding of the game. He was Makoto’s last victim and he went down fighting. Farai Janyure went down against Kudakwashe Sibanda who showed a lot of improvement from the previuos Nationals. This landed him to third position.
Former National Champion Dion Moyo found the going tough and he did not even feature in the top ten. He actually accepted that people were fully prepared this year and he really found the going tough. Moses Mutipforo was relegated to candidates after finishing last so was Byron Gurajena, Masimba Anesu, Duad Amini, and Farai Janyure. Thre was stiff competition and there games were also mouth-watering. Colleta Wakuruwarehwa won the ladies Championships followed by Tatenda Zengeni, Gumiremhete Tessa, Mathe Nomalungelo and Pasipanodya Valentine. These were the top five. Zengeni Paidaishe and Rhoda Masiyazi failed to make it in the top 5. The school girl sensation Refiloe Mudodo downed Auntie Rhoda in a pulsating game as well as Fungirayi Chiweshe,she however failed to convert a won game against Nomalungelo Mathe. The game had a lot of sacrifices and she failed to put the fail nail on the coffin and eventually lost in the end game.
Refiloe was the best scholar followed by Rumbidzai Mawire. Theressa Mapfumo and Nicole Mpambela found the going tough this time and hope they will improve next time. They were only lacking the final touch in their games but the games were very good. Nicole missed a winning combination against Pumuzile Moyo and Rhoda Masiyazi in the final round.FA Clive Mpambela ran the even with the assistance of FA Farirai Gumbe in the Nationals Championships. Powertel sponsored the event which was very successful. Meanwhile during the same time another event , the candidates open was run concurrently with the Nationals. This was held at Causeway Post Office. FIDE MASTER Douglas Munenga of Zambia won the event with 9,5 points out of 10 games. There was a four way tie on the second position which had Shepard Mubaiwa, Cevan Murerwa, Mugove Muririma and Jemba Jemusse all had 8 points out of 10. Jemba Jemusse defeated IM Kelvin Chumfwa who was the favorite to win the even in a pulsating game.
Cevan Murerwa was the hero of the last day as he also won a game against IM Chumfwa in one of his best games as he won an interesting game. The two games which IM Chumfwa lost are arguably the best games of the tournament.The one against Jemba had a lot of tactics it was very tactical.Chumfwa finished with 7,5 points along with Jeremiah Jekera, Tapiwa Chikwavaire, and Sifiso Ncube. Chikwavaire was the best scholar as well, while Sifiso Ncube was the second best scholar. Abrantess of Mozambique lost to our own Jeremiah Jekera of Bindura University a former pupil at Mabvuku High School in the last round to finish with 6,5 points. The Glen Norah Knights pupils dominated the special category. Young Madaka of Alfredbeit was the best under 10 pupil with 6 points out of ten.The tournament attracted 140 players,3 from Zambia and two from Mozambique. Elton Mhangarayi and Lvan Chivese ran the event. The next tournament will be the Harare Grand Prix which will be held in November before the Zimbabwe Chess Open. Post published in: Sport