Elton Mangoma has said if the Zimbabwe Republic Police is the best force in the region why has it taken them so long to find the missing activist, Itai Dzamara. 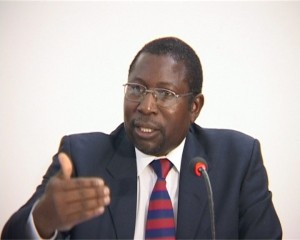 The president of the Renewal Democrats of Zimbabwe (RDZ), who recently fell out with MDC Renewal Secretary General Tendai Biti after breaking away from the main MDC led by Morgan Tsvangirai, said his party holds the government accountable for the abduction of Dzamara.
â€œThe ZRP boasts of being the best police force in the region â€“ so why is it taking them time to find this human being? It should be an easy task for them,â€ said Mangoma, adding that it was the responsibility of any government to protect its citizens.
â€œIf the people who abducted Dzamara are criminals then government must arrest them,â€ he said. Turning to the issue of forming an alliance with those who were expelled from Zanu (PF), Mangoma said he would not do so. â€œAs a matter of principle we are not going to join hands with the likes of Joice Mujuru and Didymus Mutasa because their hands are dripping with blood.Â  Our values and principles differ and there are some graves around the province to which Mutasa contributed,â€ said Mangoma.
â€œMany people in the province suffered in the hands of Mutasa and we cannot work with them because itâ€™s a betrayal of our people who have borne the brunt of Zanu (PF) repression. We will not forsake those people,â€ he added. â€œZanu (PF) should pay full compensation to all victims of political persecution since it took power in 1980. We hold government accountable for all the atrocities committed against innocent civilians.â€
But Didymus Mutasa who was Zanu (PF) National Secretary for Administration and Presidential Affairs minister said Mangoma was â€œmad and politically bankruptâ€.
â€œMangoma has nothing to offer. We did not even say we want to join hands with him. It`s sour grapes because I beat him twice in an election in Makoni North. He is full of himself for nothing,â€ said Mutasa.