Without skirmish, Robert Mugabe has willingly relinquished power to his successor. 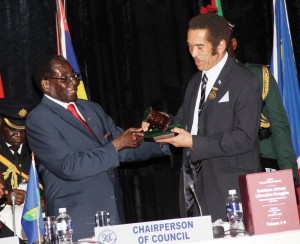 He has stepped down and there was no violent election run-off, no tortured MDC supporters. Registrar General, Tobaiwa Mudede and ZEC did not have to marinate the ballot papers for six weeks, while trying to fiddle with numbers. We did not see any Zanu (PF) womenâ€™s league members tearing off their garments in grief.
But of course this is because Mugabe only stepped down from the chairmanship of Southern African Development Community (Sadc).Â  His tenure of the rotating chairmanship came to an end last week. His lickspittles in Zanu (PF) made a lot of noise about their leaderâ€™s Sadc appointment, as if he had discovered the cure for cancer. But after all the hullabaloo, Mugabeâ€™s year-long term was a flop, which will only be remembered for draining Zimbabweâ€™s already strained resources with needless travel.

Beneficiation nonsense
Mugabe did absolutely nothing during the April xenophobic disturbances in South Africa. Except sending a bus or two, and promising to assist returning immigrants settle back home â€“ settle how? when he has no jobs for the existing population. The Lesotho crisis was managed by Jacob Zuma, proving for a second time in the last year that Mugabeâ€™s bark is louder than his dentures can bite. He introduced the industrialisation theme to Sadc and chastised his cohorts for relying too much on external funding.
In the year of Mugabeâ€™s Sadc leadership, the World Bank hacked down Zimbabweâ€™s economic growth projection from 3,2% to 1% – which is still a generous estimate, given the extent of corruption, patronage and the absence of foreign direct investment. While talking tough about not relying on external resources at Sadc, back home Zimbabwe relies heavily on donor funding.
The â€˜beneficiationâ€™ nonsense Mugabe often speaks of is a joke, as long as his government remains clueless about the quantity of diamonds extracted from Chiadzwa â€“ never mind the more difficult task of â€˜value addition.â€™

Bob and Khama
Botswanaâ€™s President Ian Khama takes over the Sadc chair. He and Mugabe disagree on many issues â€“ not least Mugabeâ€™s election fraud. In 2013, following Zanu (PF)â€™s controversial election victory, Morgan Tsvangirai appealed to Sadc for assistance.
Khama was the only voice in the room calling for investigation while the club of self-enriching cigar chompers legitimised Mugabeâ€™s theft, even when they had seen, in Technicolor, Zanu (PF) transporting supporters by bus, from different constituencies, to vote in opposition-dominated territories. Sadc and AU observers saw for themselves that Mudede hid the voters roll.
Botswanaâ€™s permanent secretary for information,Â  Jeff Ramsay, said â€˜while they (election observers) found that the election was free of violence and intimidation and that indeed voting was peaceful, they also did raise a number of other issues about the process, particularly to do with the votersâ€™ roll, and the ability of people to vote. We are proposing that an independent audit should be undertaken by Sadc itself so that there is a way of assessing the situation for lessons moving forward.â€™

Origins of feud
Mugabeâ€™s spat with Khama goes back several years. In June 2008, after Mugabe butchered and maimed his way back into State House in a violent election run-off, Khama refused to recognise the government. The ancient leader issued a threat which was widely believed to be aimed at his critics, the late Levy Mwanawasa and Ian Khama.
â€˜We do not want war with any of our neighbours. But there are some who are itching for a fight. Let them try it. They will taste the salt of the fight,â€™ Mugabe fumed.
The latest spat between the two presidents was in May 2015, in Harare, when Khama reportedly blamed Mugabe for the influx of Zimbabwean refugees into neighbouring countries.
An anonymous source told the local press â€˜Khama was really upset. He was fuming. He pounced on Mugabeâ€™s rule as having created the immigration crisis which he said was endangering Botswanaâ€™s security and stretching its resources to the limit.â€™
Another source said Khama, speaking on xenophobia, bluntly stated â€˜letâ€™s address real issues and stop behaving as if South Africa is an employment bureau for the African continent… it is because of some of us who have mismanaged our economies that we have an influx of foreigners into South Africa.â€™Â  Khama reportedly departed in a huff after the tiff. Mugabe was left to invent a cover-up for his abrupt leave-taking.
At last weekâ€™s handover, Mugabe pinned the Sadc chairman badge onto the lapel of Khama. Anyone who is aware of the bad history between them might have thought that Mugabe was in the act of reaching for Khamaâ€™s neck. No sooner had Khama taken over the Sadc chair, than he launched into a tirade about African autocrats who overstay in office, a speech ostensibly aimed at Burundi but which fits the Zimbabwe situation.
â€˜It doesnâ€™t matter how you got there. At the end of the day, once you sit in the office and you assume all the functions and duties of that office, you are serving your term. In my opinion he (Nkurunziza) has served two terms.â€™ Mugabe, who has had seven terms in office, must have shifted uncomfortably in his seat.

Chalk and cheese
Mugabe and Khama have birthdays a week apart â€“ 21st and 27th February â€“ but that is the only common ground. When Mugabe came to power 1980, Khama was only 27. They have an age gap of three decades. Mugabe cannot find any love at home, so he gallivants across the continent, where his racism is mistaken for â€˜Pan Africanism.â€™ Khama does not feel the need to travel so often. In fact he never attends AU summits. Mugabe is known for his bigotry â€“ â€˜Africa for Africans.â€™ Khama has a more liberal view on things â€“ after all, he was born in exile, owing to the colonial governmentâ€™s opposition to his parentsâ€™ interracial marriage.
In order to take a seat in the National Assembl Khama, who is of royal lineage, gave up any chance of ever becoming chief. Botswanaâ€™s laws forbid chiefs from engaging in active party politics.
Chances are if Mugabe had been in Khamaâ€™s shoes, he would simply have re-written the law, as he did with the Zanu (PF) constitution in 2014. Khama is a critic of the genocidal Sudanese President, Omar al-Bashir. Mugabe, laden with the guilt of 20,000 corpses of his own, twists the Darfur issue into one of race â€“ ICC versus Africa.
The key difference is that Khama administers Africaâ€™s 16th wealthiest country. Mugabe, on the other hand, runs the second poorest nation in the world.

Sadc nightmare
Many Zimbabweans will be hoping that he can use his influence to turn up the heat on Mugabe.
Zimbabweâ€™s security sector and media reforms, prosed by Sadc before 2013, have not been undertaken. This is one item that the new Sadc chair should revisit.
Sadly, Khama is outnumbered by the Mugabe apologists within the 15-member regional body. But Mugabe will not sleep a wink ahead of future SADC conferences. Even the devil knows that Karma â€“ if not Khama â€“ can strike at any moment. – Till next week, my pen is capped. JerÃ  Twitter @JeraZW