Reading the news headlines this past week, one can only conclude that nobody in government cares about the poor majority of Zimbabweans. 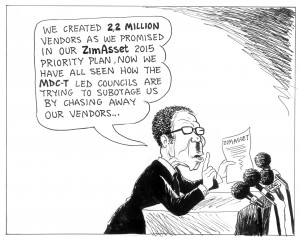 Ours is now the second poorest country in the world. Most people stretch $200 or less to make it from one month to the next. The only thing preventing the impoverished majority from seeing an early demise is Godâ€™s mercy and the generosity of Diaspora relatives who send monthly alms. Given this background it is mindboggling that government continually does its best to ban all the informal business ventures of the poor.

Foiled ventures
The Harare City Council has outlawed the rearing of chickens within city limits and vendors who only want to survive are constantly harassed as if they were selling narcotics. The city fathers quote irrelevant bylaws that were put in place by some dead white man back in the 1950s. Our politicians are sticklers for upholding the law, especially when the law drives the poor into further destitution. The President promised two million jobs – but hot air is more tangible than this promise.
They say â€˜he who marries his mistress creates a vacancy.â€™ Mugabe married his mistress and ex secretary, Grace. Chances are she does not trust secretaries. I wonder if the President has a PA. If he does, she probably sits at her desk with a pair of scissors in hand and daily newspapers on her lap, snipping out all the grisly bits from the local news.
I doubt that the radio in the presidential limousine has any of the local stations. When he tunes in, all he gets is static, and maybe Zim dancehall. It could be he is oblivious to the majorityâ€™s suffering. This would explain Mugabeâ€™s inaction.

Kotamai Boutique shuts down
Finance minister Patrick Chinamasa has banned the importation of second hand clothes. Maybe he wants the poor to emulate him and his moneyed friends who shop in Dubai. Several parliamentarians have urged Chinamasa to reconsider his decision.
Paurina Mpariwa said, â€˜My appeal to the minister is that he should look into this and he should reconsider lifting the ban because the protection of the (textile) industry isnâ€™t necessary as we donâ€™t have the money.â€™
The second hand business â€“ Kotamai (Bendover) Boutique, so called because customers stoop to examine wares spread on pavements â€“ has been banned in order to protect the local textile industry. But where is this textile industry that the minister speaks of? Not many Zimbabweans can afford to buy $20 jeans from Harareâ€™s First Street. It is only because of these hand-me-downs from abroad that many children do not walk around with their buttocks on display. It is because of Kotamai that many of our sisters and brothers do not resort to despicable measures for survival.
But the President does not lift a finger in our defence. He and Grace shop in Hong Kong. Mugabe might still have residual Saville Row suits from the old days when he was still allowed past the carousel at Gatwick. Adorned in his silk pocket squares, he does not care one thread about the poor personâ€™s struggle.

No golden handshake
In the past three weeks, local industry bosses and government have been united in impoverishing us further. As conditions worsen under Mugabe, many employers were in a catch-22; unable to pay wages because business is low and unable to cut back because they could not afford to give retrenchment packages. But the Supreme Court, giving credence to Dickensâ€™ timeless words â€“ â€˜the law is an assâ€™ â€“ threw the employers a lifeline. Now they can fire anyone at only three months, without so much as a bicycle. An estimated 20,000 workers have been affected.
At the last count, unemployment in Zimbabwe was 80-90%. But after recent events, nobody would dispute an estimate of 95%.
Media mogul Trevor Ncube celebrated this legal loophole on twitter. Ncube posted â€˜Finally there is sanity in Zimbabwe job market. The lazy and incompetent will be shown the door. Talented/hardworking will prosper.â€™
But poor performance has very little to do with these dismissals. It is likely that the â€˜lazy and incompetentâ€™ are spotted and weeded out much sooner in their careers. Many of those affected are long serving employees.
Through its mouthpiece, The Herald, government has defended Mugabeâ€™s silence on the dismissal of employees. The propaganda paper has cobbled together the opinions of lawyers who are known to be chummy with Zanu (PF). Legal practitioner, Terrence Hussein, said â€˜The President has taken the correct position because Presidential Powers can be invoked where there is an emergency, which is not catered for in the law. In this case, the law can deal with the situation by amending the Act and there is no need to take that route.â€™

Presidential pardon
In 2009 President Mugabe unshackled 2,549 convicts â€“ two of them having been locked up for murder. In 2014, a further 2500 prisoners were released through a presidential pardon. In 2013, he signed off on the cancellation of all debts owed by residents to urban councils. He whipped out his pen and cancelled all Zesa bills. In June this year, Mugabe used Presidential Powers to stop the sale of Psmas assets, after the medical aid provider failed to meet its financial obligations. Mugabe is willing to liberate convicted purse-snatchers and sodomites of sheep. He can just as easily stop the senseless dismissal of employees.
Faced with a huge wage bill, Mugabe is probably hoping to allow Chinamasa to sack thousands of government workers before the Labour Act is belatedly amended. This law has been in existence for decades. Employers never felt the need to sack workers without compensation because conditions allowed business to operate viably. If Mugabe cannot intervene out of compassion, he should do it out of guilt â€“ all of this is a problem of his making.
Robbing Bank of Zimbabwe
The Zanu (PF)-dominated Parliament has passed the controversial Reserve Bank Debt Assumption Bill, in terms of which the taxpayer will adopt RBZâ€™s debts of $1,3B. This has caused public outrage as the RBZâ€™s debts were largely accrued in the hyperinflation era, during which Zanu (PF) bigwigs looted the central bank through black market foreign currency deals and the Farm Mechanisation Scheme, a political gimmick intended to buttress the Mugabe regime. Beneficiaries of the corrupt activities at RBZ live in silent luxury, while ordinary citizens are forced to carry the load.
Murambatsvina returns
Despite having a national housing waiting list of over a million, Mugabeâ€™s government continues to demolish homes which are purportedly constructed in undesignated areas. The state has not provided alternative shelter for those affected. Several affected home owners claim to have purchased their residential plots legally. Despite the 2013 Chitungwiza land audit by the previous local government minister, Ignatius Chombo, no arrests have been made.
The welfare of ordinary citizens is bottom of Mugabeâ€™s list of priorities. In fact, one might venture to say Mugabeâ€™s final mission is to inflict the cruellest torture on us before he exits. I have a nagging suspicion that the Presidentâ€™s continued indifference for the ordinary citizen shall, in the end, be his downfall.
– Till next week, my pen is capped. JerÃ  Twitter @JeraZW