It is now exactly two years since President Robert Mugabe controversially won a seventh term in office on the back of a missing votersâ€™ roll and the promise of 2,2 million new jobs. Following his stolen victory, Mugabe and his party frenetically ran around, to China, Russia, India â€“ anyone who would let them through 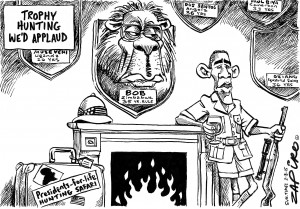 It is now exactly two years since President Robert Mugabe controversially won a seventh term in office on the back of a missing votersâ€™ roll and the promise of 2,2 million new jobs.
Following his stolen victory, Mugabe and his party frenetically ran around, to China, Russia, India â€“ anyone who would let them through customs and immigrationÂ  â€“ in search of funding for the much hyped ZimAsset. Despite making several east-bound flights, with tail between legs and cap in hand, Mugabe has been rebuffed wherever he has gone.
In China, he was sent away with monopoly money, in the form of worthless memoranda of agreement and a few bags of rice â€“ â€˜we want bankable projects, hereâ€™s some rice. Food for thought, Bob.â€™ In India he came away with more rice. Word must have got around about Zimbabweâ€™s veneration of â€˜rice and chicken.â€™ In Russia, Mugabe who normally slouches in his seat due to old age, literally sat on the edge of his chair, leaning forward as if expecting Vladmir Putin to throw him a bone. In contrast, Putin leaned back in his chair, wearing that expression that says â€˜you wish you were me.â€™
Now, two years after making unachievable promises, Mugabe will have to sit down, unravel his serviette and savour a generous helping of humble pie. Apart from David Whiteheadâ€™s revival, which created 200 jobs, there has been no progress on the employment front.
In the last fortnight alone, over 6,000 employees have been dismissed by companies seeking to cut costs in a difficult operating environment engendered by Zanu (PF)â€™s dim-witted policies. Mugabe would probably have pointed to sabotage by his detractors, as he always does, but now even his own ministers have begun to sack employees, in direct contradiction of ZimAsset.

Govt increases unemployment
State owned National Railways of Zimbabwe has â€˜let goâ€™ 355 workers. Transport minister Obert Mpofu admits that NRZâ€™s railway lines and fleet are antiquated â€“ most of them as old as 40 years. In-between tracks, the grass is tall enough to hide a small child. Railway signals do not work and engine drivers communicate via mobile phone. Imagine that â€“ â€˜hey, Iâ€™m heading east, if anyone is in my way basopo!â€™
The dismissal of 355 railway employees is only the first batch of sackings. About 900 more workers are expected to make tracks out of the railway yard â€“ and all that after Mpofuâ€™s promise to revive the parastatal.
â€˜We envisage that once these engagements (with investors) are concluded, NRZ will again rise to its full potential. In fact, negotiations have progressed well up to this point and we are looking to an agreement soon,â€™ Mpofu said, in June 2014. â€˜Soonâ€™ has turned out to be over a year.
Charity begins at home. It was obvious Mpofu would fail in his attempts to save NRZ. After all, his own enterprise, Allied Bank, collapsed leaving 250 workers jobless. Despite NRZâ€™s straitened circumstances, in February, Mpofu seized a whole train in order to ferry Zanu (PF) supporters to Mugabeâ€™s birthday party held in Victoria Falls. At its peak, NRZ moved 18 million tonnes of cargo a year. Now it only transports three million tonnes annually.

A tradition of not caring
Air Zimbabwe has joined the list of state enterprises that are flying in the opposite direction ofÂ  Mugabeâ€™s ZimAsset hot air. The national airliner has sacked 10 managers and more dismissals are expected. The news coincides with reports of shortage of A1 jet fuel at the national airline. None of this makes sense. There is no money, but Mugabe has commandeered Air Zimbabwe planes no less than 20 times for his trips abroad this year.
Zimbabwe National Roads Administration (Zinara) has told 100 employees to hit the road. In September 2014, Finance Minister Patrick Chinamasa expressed concern over the governmentâ€™s high salary costs.
Chinamasa said, â€˜I am embarrassed that our wage bill is some 76% of whatever revenue we receive… Itâ€™s not sustainable.â€™Â  After dropping hints since then, Chinamasa has now announced intentions to cut government wage bill by 40% which might mean job losses.

What ZimAsset?
Even Mugabeâ€™s own lieutenants do not seem to believe in the ZimAsset dream. Second Vice President Phelekezela Mphokoâ€™s supermarket chain, Choppies, has fired 90 workers in order to â€“ excuse the pun â€“ chop its wage bill. What is very sad (or humorous, depending on oneâ€™s viewpoint) is that the VPâ€™s company based its decision on court cases adjudicated by Rhodesian judges. The letters of dismissal, in part, read:
â€˜The termination is made in accordance with section 24 of National Employment Council for the Commercial Sector Zimbabwe and this held to be a test in the case of… Blackey Versus City of Salisbury 1978, Rhodesian Law Reports.â€™
I thought we were better than those evil Rhodesians?! All our party T-shirts, bearing Gushungoâ€™s stern countenance, boldly shout â€˜Indigenise, empower, employâ€™ do they not?

Mnangagwa in denial
In February, Vice President Emmerson Mnangagwa attributed the lack of foreign investment to bureaucracy. â€˜We are worried about low foreign investment uptake due to red tape. We need to be investor friendly and not the current situation whereby investors take long periods to know of their fate because of red tape,â€™ he said.
The VP has had a long think and now says the reason for investor aversion is poor corporate governance. Mnangagwa should have deleted the word â€˜corporateâ€™ for a more accurate speech.
On his July 2015 trip to China the VPÂ  attempted to appeal to the emotions of his hosts, by recounting tales of his visit in the 1960s, when Zanu (PF) sought military assistance for the liberation war. But the Chinese remained pokerfaced while Mnangagwa went through his bootlicking repertoire and sources within the VPâ€™s entourage let slip that China is not keen to do business until Zimbabwe repays loans totalling $1,5 billion.
â€˜Sinosure, an insurance company, is refusing to guarantee more loans from Chinese banks to Zimbabwean companies because of the governmentâ€™s failure to repay arrears,â€™ said the unnamed source.
China, our much vaunted â€˜all-weather friendâ€™ is nervy about Mugabeâ€™s advanced age and the lack of a clear succession plan. The Far Eastern superpower is also concerned about the level of corruption, a subject highlighted by Wang Wenbin, the CEO of Industrial Commercial Bank of China, in March 2014. Wang used Chinaâ€™s own history as an example of a once modest economy that was transformed after the eradication of corruption.
â€˜We had a nationwide anti-corruption movement targeting both the tigers and flies. Ministers were investigated, and some of them are already in jail for corruption. You cannot make an economy grow to higher levels without tackling corruption,â€™ said Wang.
Despite making all the right noises in public, Mugabe has failed to defeat graft in government for fear of alienating members of his inner circle – who are necessary for his political survival.
A lot of theories have been offered to explain investorsâ€™ distaste for Zimbabwe; bureaucracy, bad corporate governance, indigenisation. But letâ€™s cut to the chase and discuss the elephant in Munhumutapa office: nobody will make any meaningful investment in Zimbabwe until Mugabe is out of the picture. Everything else is irrelevant.

– Till next week, my pen is capped. JerÃ  Twitter @JeraZW