This week, President Robert Mugabe gave his State of The Nation Address â€“ more like distaste of the nation. 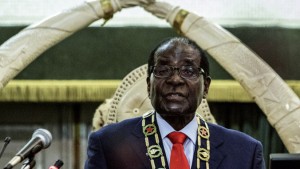 Even under a microscope, you wonâ€™t find one sensible sentence.

He thanked the nation at large; â€˜our people who have joined hands in peace building efforts, even under very difficult socio-economic conditions.â€™ Is it not he who created those â€˜difficult socio-economic conditions?â€™ And to thank the nation for â€˜peace building effortsâ€™ is a slap in the collective face of 13M citizens. There is no peace in a country where people disappear without a trace, simply for speaking.

Mugabe unveiled a ten-point plan â€“ goodness knows where he dug that up. The educated guess is that this is just another diversion, similar to other hollow mantras, like â€˜ZimAssetâ€™ and â€˜value additionâ€™; something he can hold up at rallies for the remaining three years of his tenure.

The first point is the revitalisation of agriculture. In order to discuss revamp, the logical enquiry is why are farms in shambles? Mugabe traded in capable, committed, experienced farmers who had financial resources with part-time agriculturalists who live in towns and occasionally bring their friends to fields left fallow for years, pompously pointing to the horizon â€“ â€˜look, itâ€™s all mine!â€™

In time, the new farmers could learn. But farming is a business and all businesses require capital. Local banks do not have sufficient deposits to create a large enough pool of funds to lend. And the banks that have funds cannot lend to the agricultural sector in the absence of title deeds. Unless there is a money tree somewhere, it is hard to see how we will get past the funding dilemma.

Mugabe said, â€˜In line with our food and nutrition policy thrust, government, working closely with the private sector development partners has adopted a grain importation programme.â€™ What a fancy way of saying â€˜without the foreign NGOs you would all starve!â€™

â€˜We are looking at bringing food and cash assistance during the lean season, which begins earlier than usual this year,â€™ said WFP spokeman, David Orr.

Lately Mugabe has grown fond of the B word â€“ â€˜beneficiation.â€™ In order for governmentâ€™s much vaunted â€˜policy thrust on beneficiation and value additionâ€™ to become real, extractive sector has to be run efficiently and with accountability. Take the example of an egg producer. To add value to the product, eggs may be hatched into chicks, which are sold at a higher price. If the egg handlers are stealing eggs or the business lacks a hatching machine, any talk of value addition, quite frankly, stinks. Like a rotten egg. Corruption runs deep in the mining sector where the small businesses use old-fashioned extraction methods. Small scale gold miners only have picks and shovels. Very few of them have their own mills. Because they outsource milling services, pilferage of refined gold is inevitable.

We cannot speak of making bed sheets from cotton when there arenâ€™t enough farmers growing the cotton. We need to get our basics correct before we can even dream of value addition.

Point three is â€˜focusing on infrastructural development, particularly in the key energy, water, transport and ICTs subsectors.â€™ This is another phrase that will get you several phone numbers if said out loud at a cocktail party. But really, what does it mean? To begin with, is this not what any government ought to do any way? This is like a parent saying â€˜my strategy is to feed, clothe and educate my child.â€™

In all this hot air, Mugabe is not saying how this will be achieved. Eight-nine years ago, they were trying very hard to get pure diesel from a rock. Now we should believe they can develop infrastructure?

Point four, â€˜unlocking the potential of SMEs,â€™ merits similar interrogation â€“ how and with what money?

Encouraging private sector investment is point five. Mugabe has leaned heavily on China, since 2000. The Look East policy has not been a success. The West is not keen on dealing with Mugabe. Even he knows that. During Mujuruâ€™s vice presidency all business delegates from abroad made a beeline for her office. And now they all follow the well worn footpath to the VP office occupied by Mnangagwa. In this age of GPRS technology, it canâ€™t be that they continually lose their way to Mugabeâ€™s office. It is down the hall from the VPs. Foreign direct investment will not come until Mugabe is out of the picture. Foreign investors in hazmat suits will not touch a business proposal signed by Mugabe.

Judging by Mugabeâ€™s speech â€“ amending procedures to increase ease of doing business â€“ it appears the President now buys into his deputyâ€™s theory about bureaucracy thwarting new investment. How about they try reversing indigenisation and ease up on the racist speeches.

Mugabe proposes a revision of the Banking Act in order to boost confidence. This is much like treating athleteâ€™s foot by polishing your shoes. New banking laws will not suddenly cause local bank vaults to fill up with money. The desperate RBZ looted FCAs in order to fund Mugabeâ€™s wild schemes during the hyperinflationary era. The public has not forgotten.

Mugabe intends to revive dead parastatals, through joint ventures â€“ a dream from which he can be awoken, with a cold bucket of water and one question â€“ who wants to partner with us?

The modernisation of labour laws is too little too late â€“ 20,000 jobs have been lost in just one month.

Deservedly, Mugabe was jeered when he said, â€˜to pursue an anti corruption thrust.â€™ We have heard this song before. If anybody can spare a coin, maybe the jukebox might play a different tune.

What we hoped for was humility and truth â€“ â€˜fellow citizens, the state of the nation is that it is in tatters and it is my fault.â€™ Instead we heard empty rhetoric and lies â€“ â€˜overall economic performance to date, indicates modest growthâ€™ (cue the hecklers).

You know the President is clutching at straws when his speech reads, â€˜Tourism is mainly driven by our rich climatic, natural and…â€™

The subtle manoeuvre there was to use adjectives like â€˜richâ€™ in the desperate hope of inducing thoughts of wealth where poverty prevails.

I want my 35 minutes back

It was an uncharacteristically brief speech â€“ one that lasted under 35 minutes and left the nation feeling bemused, like a new bride who shakes her snoring groom and asks, â€˜was that it?â€™

By the brevity of his address, it can be assumed Mugabe now knows he has nothing to offer. The only positive is the manner in which opposition MPs continually heckled the ageing President. Twenty years ago, even if you had hay fever, you held in your sneeze until the President was done talking. Perhaps the opposition have finally grown a spine.

I listened to the Presidentâ€™s speech, from beginning to end. That, sadly, is a precious half hour that I will never get back.