On Saturday 29 August, Harare-based arts development NGO Pamberi Trust springs back onto the public scene in the capital with a celebration of youth and cultural diversity, commemorating International Youth Day - an exciting triple-bill between hot young artists of Harare, Bulawayo and the small village of Glendale in Mashonaland Central district of Zimbabwe. 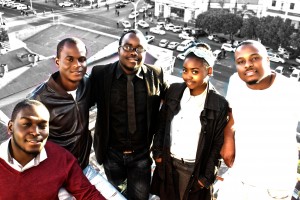 From 3-6pm the â€˜Pamberi Gardenâ€™ stage (back garden of 139 Samora Machel Ave) will present a free show featuring two groups from the two big cities â€“ Jam Signal (â€˜house-jazz-traditionalâ€™) of Harare, The Outfit (â€˜contemporary fusion jazzâ€™) from Bulawayo, opening with newcomers Knight Sounds from the dusty streets of Glendale village.

The event is a production of Pamberi Trustâ€™s youth project â€˜Music Factoryâ€™ and to commemorates International Youth Day, drawing attention to the 2015 theme â€œYouth Civil Engagementâ€ – the importance of youth civic engagement and its benefits to the individual and to society, for â€œsustainable development as well as resilience and wellbeingâ€ (see more below).

Youth development in the arts is the business of Pamberi Trust, who have been quietly working behind the scenes of late, still situated in the back garden of 139 S.Machel Avenue (entry on 6th Street), and now moving back into the public eye with their regular programme of development activities, starting with the Music Factory event in the garden on Saturday 29 August. Regular favourites House of Hunger Poetry Slam and Sistaz Open Mic are expected to return to the Pamberi Garden stage in September.

The afternoon will also be a celebration of the protection of creative spaces, and features as usual, exciting young artists from widely different backgrounds together, and a unique opportunity for networking between artists and audience alike.

The event also falls within the Pamberi Trust project â€˜Re-linking Communities through Cultureâ€™. Youth project officer Hector Mugani says â€œThe event on Sat 29 August will link young artists from different cultural and social backgrounds together to interact and share their experiences, with music as the expressive medium. By relinking the communities we promote inclusion, understanding and tolerance, and the ideals of uniting as a nation. Itâ€™s a point where we celebrate Zimbabwean cultural diversity and also the young talent that abounds throughout Zimbabwe.â€

Pamberi Trust Arts Administrator Penny Yon said â€œWe are delighted to be able to maintain the platform for artists in the back garden of 139 Samora/6th Street after this quiet period. Thanks to all who have supported us over the intervening months. The Saturday 29 August Music Factory event offers free entrance for all, and we call on all family of artists to come out and celebrate – this space is your space!â€

JAM SIGNAL
Jam signal is a hot young trio who have been heating up stage around the capital and beyond in the last two years, stepping out boldly to deliver a dynamic and entertaining performance underpinned by their distinctive fusion of urban-house, jazz and Zimbabwe traditional music.

The band comprises Abel Maunga (keyb), Mutswashe Gudlanga (drums) and Osborne Matengenzara (sax), and have performed at several venues and festivals in Harare including Book Cafe, Pariah State, Alliance Francaise and the Zimbabwe-German Society, and at Intwasa Festival in Bulawayo and other festivals in 2014. Their furthest reach so far has been an exciting performance in Kenya through the Zimbabwe-German Society.

THE OUTFIT
The Outfit are a young vibrant group whose style is self-described as â€˜contemporary fusion Jazzâ€™. The group started on a casual note as high school boys in 2007; went professional in 2010, and in 2013 recorded their first album, â€˜Smileâ€™.

Their stage performances are soulful, emotional and energetic, and they perform widely in Bulawayo including Intwasa and Ideas festivals, NAMA and various award events, highlights being the Delta Magnum Launch 2012 with Judith Sephuma (SA) and Kunle Ayo (Nigeria) and the Routes Africa Awards Ceremony 2014 with Oliver Mtukudzi . They have performed in Harare several times, in the Book CafÃ©, Mistys, Pariah State and other venues, earning respect and appreciation of Harare audiences and fellow artists alike.

KNIGHT SOUNDS, GLENDALE
Newcomers to the Pamberi Trust stage are Knight Sounds â€“ (named after the brave knights of old) – with a strong message from their gospel background, and who are strongly influenced by traditional Zimbabwean rhythms such as mande, shangara and mbakumba which they enfuse with rhythms from other cultures in their own unique style of afrojazz improvisation. Discovered by Hector Mugani on the dusty streets of the small village of Glendale in Mashonaland Central, the group has already risen to the district level of the Chibuku Road-to-Fame competition, and will be competing in September in Guruve for the provincial level. The Music Factory event will provide with them with an opportunity to enhance their stage performance before the big day, and network with other young artists featured.

PAMBERI TRUST
Pamberi Trust programmes for youth, gender, and freedom of expression have been running since 2007, embraced by artists and supported by organisations who over years have made serious and real investments into Zimbabweâ€™s cultural industry on behalf of their governments.

With this support, Pamberi Trustâ€™s youth programme, also known as BOCAPA, has worked with artists over more than a decade, providing access to equipment, stages, workshops and mentoring, with activities built around 3 main events: a first platform for exposure at the historical Monday night â€˜open micâ€™ which would invariably attract established artists also; a Tuesday showcase to individual groups from the open mic who show sparks and fire; and a monthly â€˜Music Factoryâ€™ event of cultural diversity, brought together as a production of the project.

From its start and ever since, the platform has witnessed the emergence of many young artists, some of whom grew to huge prominence in Zimbabwe and in the world â€“ Chiwoniso Maraire, Victor Kunonga, Dudu Manhenga, Andy Brown, Hope Masike, Chikwata.263, Progress Chipfumo, Ba Shupi, Jah Prayzah and so many more – some of whom returned as mentors to new emerging artists in the programme.

Partners in the delivery of this event and other youth and gender programmes, are the Culture Fund of Zimbabwe Trust’s ‘Culture Impact’ programme; Hivos (Netherlands) for youth outreach; Africalia (Belgium) for the creation and development of performing arts platforms, and Arterial Network Zimbabwe, in their continuing membership drive.

ARTERIAL NETWORK â€“ Membership Drive
Arterial Network Zimbabwe is part of an African cultural initiative, represented in Zimbabwe by key figures in the arts. It aims to bring together artists and arts institutions to create a well-constituted membership-driven organisation, which will serve as a mother-body and voice for artists, provide a platform for artists access to information, training and other skills, and give its members visibility.

National Coordinator Mandla Ncube said Arterial Network Zimbabwe will boost their agenda at the event, and be undertaking a nation-wide membership drive in the coming months, â€œto make artists more aware of our activities and strengthen a body that will be key to tackling artists issues, and through advocacy, lobbying government and other sectors to realise the need to support the creative industries.â€