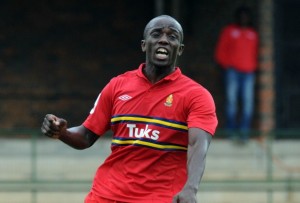 The industrious midfielder, one of the many to be discarded by Mamelodi Sundowns in recent years, vainly scrounged around for another club in the Absa Premiership during the off-season.
When it eventually proved difficult to find a new home, he dropped a rung when he recently signed for FND outfit, Vasco da Gama of Cape Town.
The former Caps United star midfielder is one of the experienced players now tasked with guiding the former PSL outfit back into the topflight league, alongside fellow new signings that include Ugandan forward Ntambi Kirizestom, Botswana striker Omaatla Kebatho and Ghanaian midfielder Mumuni Abubakar.
Mutizwa, formerly a household name in Zimbabwe, looked set to scale dizzier heights when he signed a five-year contract with Sundowns in 2010, but he was soon struck down by an injury that kept him on the sidelines for close to a season.
At some point, he also had to endure another season fit but out of action, as the Brazilians had not registered him with the league, having exhausted their quota of foreign players. He was later loaned out to Pretoria University, where he had his best seasons in South Africa, which prompted his mother club to call him back, yet he was to be discarded into the cold again, after the close of the transfer window.
Several attempts to find a new club, which included trial stints with a number of clubs that included the now-relegated Moroka Swallows failed to yield results, till the Zimbabwean looked below the topflight.
Lionel is son of former Zimbabwean great – Stanford â€œStixâ€ Mutizwa, who played for the great CAPS United side of the 80s and early 90s.