A new season and a new team means new goals for Tendai Ndoro. 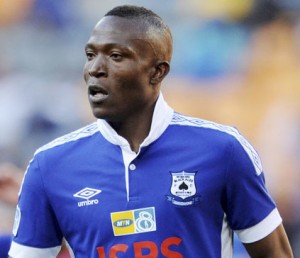 Tendai Ndoro of Black Aces during the 2014 MTN 8 Quarter Finals match between Kaizer Chiefs and Black Aces at FNB Stadium, Johannesburg on the 03 August 2014
Â©Muzi Ntombela/BackpagePix

The Zimbabwe national team striker, who made the move from Mpumalanga Black Aces to Orlando Pirates in the off-season, made clear his goal for the coming year â€“ scoring many goals.
The striker, who converted the winning penalty as Pirates beat perennial rivals Kaizer Chiefs 4-3 in the Absa Premiershipâ€™s season preamble, the Carling Cup, last weekend, said banging them in would determine his chances of settling in the starting line-up for the Buccaneers.
Pirates, who ended without any silverware last season, are under huge pressure to atone this season, but so will Ndoro be, as he tries to adjust as fast in Johannesburg as he did in Mpumalanga a few seasons ago.
â€œIt was great scoring against Chiefs because I have learnt that matches between the two teams are very important, especially to the two clubsâ€™ fans, so I am obviously happy to have converted the winning penalty,â€ said the former Zimbabwe Castle Lager league Golden Boot winner.
â€œI got a good reception from the supporters and scoring in my first game with the club has settled me as a player. The idea now is for me to keep working hard and making use of all the chances I get. The competition for places in the team is very stiff, but I expected this because this is one of the top teams in the country.â€ Having made it at Chicken Inn and Aces, the Zimbabweans know that a striker is as good as his last goal. â€œAs strikers, we are all striving to score as much as we can so that the coach will have a tough time deciding who to choose for each coming game,â€ he said.