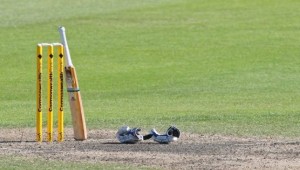 The sport of the gentleman is usually described as elitist due to expensive facilities and equipment needed, but street cricket, which is prevalent in other developing countries, does not require much. Instead of the expensive turf, bats, pads, and wickets, all one needs are a plastic bat, a tennis ball and a street.
The initiative has been a recorded resounding success barely six weeks after its launch in the small mining town. Three tournaments featuring children under 12 from Mbizo suburb have already been hosted – with talented youngsters emerging. These include young batsman Abremia Ibrahim who scored 27 runs to help his Musimbe team set up a challenging total of 52 in their allotted six overs which saw the side triumph at the just ended tournament.
The teamâ€™s captain, Moreblessing Mwanza, BPâ€™s Denzel Chipope, Godknows Nzira from the AFM team and Gabriel Mabika of the Dendairy outfit are other promising players.
Kenyon Ziehl, the Midwest Rhinosâ€™s chief executive officer, said â€œOur aim is to try and transform the Kwekwe community into a cricket loving city while also identifying talent at a tender age. We should catch the youngsters young and from our experience so far, we are going to come up with future great players from this.â€
Meanwhile Midwest Rhinosâ€™ seniorsâ€™ side is proving to be a toast this season after acquiring four top players from both local and international teams.