Last Friday I was in a kombi that was stopped by a cop on the flyover along Charter/Mazorodze Rd about 9.30am. Nothing unusual in that, but it is worth studying the dynamics of that interaction. 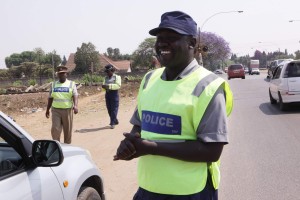 Firstly, I only saw one cop. He had an impressive-looking motorbike and was wrapped up in the full gear you’d expect if he was going to take a long ride on a cold day. Didn’t none less than the top Commissioner of Police tell us a few months ago that no official roadblock has less than two officers manning it at any time?
Maybe I missed something. Maybe even the driver didn’t want to consider a confrontation with this formidable-looking little figure if it could have resulted in a high speed chase through heavy traffic.
However that may be, we all observed the usual ritual. The little cop produced a book of forms, scribbled a few things on it and the driver quietly handed over five dollars. At first it looked to me as if he was going to fill in a form without using carbon paper, but now they have those papers which by some mysterious process, make a copy without using visible carbon paper. He gave the copy to the driver, so we could see that a copy did exist.
I didn’t get more than a quick glance at it, but most of the details seemed to have been written in the sort of hasty illegible scrawl that we always believed was only used by doctors to write prescriptions. The one thing I could read was the alleged offence: â€œNo medical certificateâ€. Now that’s a new one on me.
Fit to drive?
I suppose a kombi driver needs some kind of medical check-up before he is allowed to drive a vehicle full of passengers, but have you ever seen a cop demand that certificate without seeing any evidence that the driver was not fit to drive? Presumably this cop could see the vehicle and the driver were properly licensed, or he would have charged the driver on either of these more serious counts.
This looks like a very clear case where, if there was any good reason to doubt the driver’s fitness (though I saw no evidence to suggest he wasn’t in perfect health and perfect control of his vehicle) it would have been adequate to ask him to present his certificate at a police station within a week. The law allows this for most legally-required documents.
Of course, if cops ignore this law, they may serve â€œadministrative efficiencyâ€ and record more convictions for traffic offences. But the cost of this is that the accused person is denied a fair chance to defend himself against what is often a frivolous accusation. And we have no means of knowing whether government gets the â€œfinesâ€ extorted from us in this way. We all know that in any case involving kombi operators, the police are not impartial, since they and their friends own so many kombis. As owners, they may be at war with each other, but they conduct unending war on the drivers.
And while I’m on the subject, if I want to be given time to present a document and even go to court to defend my innocence, should I sign a form that is headed â€œADMISSION OF GUILTâ€? Surely the ticket demanding you to present yourself at a police station with your licence, insurance policy or whatever is not an admission of guilt, but an agreement you sign on the understanding that you may face penalties if you don’t keep to the conditions you agree to? Do cops on traffic duty even carry the correct form for that?
Isn’t it time for us to show that we know the law (maybe that means we should study it more closely) and stand up for our rights, as Bob Marley exhorted us on that memorable day in 1980? If we don’t stand firm, we can’t blame anybody else when these abuses continue.