Tendai Huchu and his new novel The Maestro, The Magistrate & The Mathematician are featured in two events at the Edinburgh Festival Fringe on Friday 28th August. 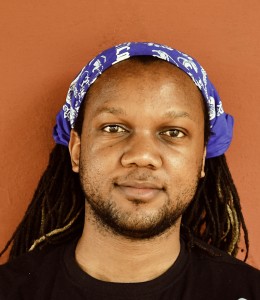 At 11am, the 2014 Caine Prize shortlisted author will read from his new novel and discuss with Ellah Wakatama Allfrey how the heritage, traditions, and vibrancy of African storytelling continue to inspire and influence his writing in the Robert Louis Stevenson room at theÂ Royal Overseas League in Princes Street.

Then, Tendai will rush off to the Stand Comedy Club in York Place, where, at 4.25pm, he will compete in a Literary Death Match. Part comedy show, part literary event, part game show, a Literary Death Match brings together four writers to read their most electric writing for five minutes or less before a panel of three â€˜all-starâ€™ judges. Tendai will be competing with Salla Simukka (author of As Red As Blood), Kirsty Logan (The Gracekeepers) and John Osborne (Radio Head). The judges â€“ Mark Doty, poet and winner of many book awards, Holly Jack, Scottish actress, and Charlie Baker, stand-up comedian â€“ will take turns providing humorous commentary and select two favourites to advance to the final. The two finalists then compete in a vaguely literary competition to determine the Literary Death Match champion.

Literary Death Match events have become popular worldwide, so far in 57 cities, being described as â€˜The most entertaining reading series everâ€™ (LA Times) and as â€˜Revitalizing the coolitude of the printed wordâ€™ (Interview)

Tendaiâ€™s writing has attracted much interest recently. A recent review of his debut novel, The Hairdresser of Harare, in The New York Times included the passage: â€˜Too often in the United States, we have created a single narrative about foreign countries, particularly African countries: Theyâ€™re impoverished and war-torn and beset by disease or, more benignly, simply teeming with exotic animals.

â€˜Thankfully, the single story seems to be giving way as American publishing has embraced a vibrant chorus of voices from the African continent â€” Adichie, NoViolet Bulawayo and Chigozie Obioma among others. To which we can now add one more, Tendai Huchu.â€™

And Jeanne-Marie Jackson in her review in Slipnet, â€˜Tendai Huchuâ€™s The Maestro, The Magistrate & The Mathematician – An African Novel and Then Someâ€™ added: â€˜Tendai Huchuâ€™s new book reminds us that serious thinking is as important as driving home what we already know.â€™

In The Maestro, The Magistrate & The Mathematician, three very different men struggle with thoughts of belonging, loss, identity and love as they attempt to find a place for themselves in Britain. The Magistrate tries to create new memories and roots, fusing a wandering exploration of Edinburgh with music. The Maestro, a depressed, quixotic character, sinks out of the real world into the fantastic world of literature. The Mathematician, full of youth, follows a carefree, hedonistic lifestyle, until their three universes collide. In this carefully crafted, multi- layered novel, Tendai Huchu, with his inimitable humour, reveals much about the Zimbabwe story as he draws the reader deep into the lives of the three main characters.

The official United Kingdom launch of the novel will take place later, on 30th October as part of the Edinburgh Independent & Radical Book Fair. The Fair is an annual literary festival providing five days of cultural and literary events, which are free for all to attend. The Fair attracts writers, publishers and readers often neglected by mainstream bookshop events and other literary festivals. It aims to support small and independent presses who struggle to get shelf space in major bookshops. Over 70 local and international publishers take stalls to display their titles.

The Maestro, The Magistrate & The Mathematician is published in Zimbabwe by amaBooks, in the United Kingdom by Parthian Books and in Nigeria by Kachifo. It is due to be published in North America by Ohio University Press, in Germany by Peter Hammer Verlag and in Italy by Corpotre.