Thanks to Cecil, the ugly under-belly of wildlife poaching in Zimbabwe has been exposed on the global centre stage. 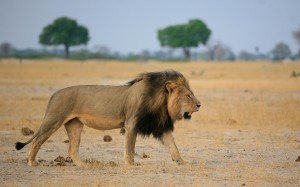 Ever since President Robert Mugabeâ€™s government began to confiscate land from commercial farmers in 2000, it has been open season on the nationâ€™s wildlife. Cecilâ€™s death was the tip of a mighty iceberg of lucrative poaching, involving the land grabbers, crooked safari operators, greedy officials and blood-thirsty hunters.

The land â€œreformâ€ programme was ostensibly to benefit landless blacks who had been dispossessed of their land by wicked colonialists. But in reality Mugabe simply doled out white-owned farms to the well-connected in his party, to discontented war veterans and senior officers in the military and police â€“ in return for their un-wavering loyalty.

By anthropomorphising and collaring Cecil, the Oxford University researchers who were studying him unwittingly made him a global hero â€“ mourned upon his death by millions via the worldâ€™s media. Because of his distinctive black mane, Cecil was a hit with tourists, many of whom had video footage of him in the wild â€“ which now has a global audience.

While the worldâ€™s anger has been largely directed at the great white hunter Walter Palmer for sending Cecil to meet his maker, no mention has been made of the thousands of nameless others who have been killed in recent years. This year alone four collared lions have been killed in Hwange Game Reserve, and 34 others have been killed in the past few years, according to the Zimbabwe Conservation Task Force (ZCTF). But they had no names â€“ so nobody cared.

From on-the-ground studies and aerial tracking the Force estimates that there are about 1,300 lions left in Zimbabwe today, compared to about 3,000 in the 1980s.

Neither has there been a tear shed for the decimation of elephant populations during the past decade. An estimated almost 20,000 have been killed since the land invasions began. The Zambezi Society reports a 75% decline in the numbers of elephants in the Zambezi Valley since 2001 – from 14,000 to 3,500, and a 40% decrease in the middle Zambezi Valley complex (which includes Mana Pools) – from 18,000 to 11,500 in the same period.

These statistics derive from a national air survey conducted by experts as part of the Africa-wide Great Elephant Census, which surveyed all major elephant populations on the continent in 2014.

Despite being closely guarded at a cost of thousands of dollars per annum (donated by well-wishers around the world) rhinos have not escaped the slaughter â€“ their numbers have been decimated in the past two decades from close to 2,000 down to only 750 – 450 black and 300 white. Poachers killed 20 in 2014, 60 in 2013 and 84 in 2008, according to the director of the Zimbabwe Parks and Wildlife Authority.

Zimbabweâ€™s slide into lawlessness and rampant corruption at every level of society has been well documented. Mugabeâ€™s lust for power at any price, combined with an efficient patronage system and a total disregard for the law, has seen the jewel of Africa deteriorate into the stereotypical African basket case. Anything is possible. Everyone has a price. Zanu (PF) is at the top of the food-chain.

During the â€œjewelâ€ phase (1980-1995) when Mugabe was still the darling of the west, he decreed that a herd of some 400 elephants, which roamed unfenced state land just outside Hwange National Park, should never be hunted or culled, but preserved as a symbol of the nationâ€™s commitment to responsible wildlife management.

But now, along with diamonds, gold and other precious minerals, the nationâ€™s rich wildlife heritage is just another valuable commodity to be sold to the highest bidder. This heritage was nurtured through the creation of several national parks decades ago and, latterly, by individual commercial farmers who established lucrative conservancies on the borders of these parks. Prior to 2000, trophy hunting was managed by a strict quota system and valuable revenues accrued to the national fiscus.

The herd was one of the first casualties of the land grab â€“ with a prominent government official laying claim to the land. Remarkably he managed to secure a spot hunting quota for the elephants. For 13 years environmentalist Sharon Pincott worked tirelessly to safeguard the elephants â€“ but she gave up in despair last year. Worn down by the battle against corrupt officialdom and personal threat she was forced to abandon the herd to the mercy of greedy poachers.

And there are plenty of high bidders out there. Palmer paid US$50,000 for Cecilâ€™s scalp. Kenyan-based Save the Elephants recently highlighted a huge escalation in the demand and price of elephant tusks in China since 2002. Chinaâ€™s legal ivory trade, it believes, is acting as a smokescreen for horrific escalation of illegal activities which are driving the unsustainable killing of Africaâ€™s elephants. United Nations wildlife experts say the trade in illegal ivory has more than doubled since 2007. China, together with Vietnam, is also the major market for the supposedly aphrodisiac rhino horn.

A Zimbabwean woman of Chinese descent, Song Li, has been named as a central agent in the recent controversial exportation of baby elephants to China. She is believed to be working in cahoots with powerful politicians and a cabal of underworld dealers.

In 2013 Zimbabwe hit the headlines when 300 elephants were killed for their ivory by lacing waterholes and salt licks with cyanide. Lions and other carnivorous animals feasting on the carcasses also died. This was described by conservationists as the worst single massacre in southern Africa for 25 years. When environment minister Saviour Kasukuwere, visited a village just outside the park he was told that the poachers had acted out of desperation as their crops had failed and tourism fees from hunters and safari operators had dried up.

Another success story of the jewel years was The Communal Areas Management Program for Indigenous Resources (CAMPFIRE), set up to empower rural communities for conservation and sustainable development through harvesting natural resources. A majority of the profits came from leasing trophy hunting concessions to foreign hunters â€“ and were used to provide schools, electricity, clean water, road building and grinding mills for maize. It has been estimated by the World Wildlife Fund that households participating in CAMPFIRE increased their incomes by 15-25%.

The decimation has not gone un-noticed by those in power. 151 wildebeests, 100 impalas, 60 zebras, 25 eland and 10 giraffes from the Save Valley Conservancy in Masvingo were bussed in to stock the Zambezi National Park in Victoria Falls just in time for the United Nationsâ€™ World Tourism summit conference last year. At the time, Johnny Rodrigues, chairman of the ZCTF, which revealed the figures, questioned why the move was necessary and how Zimbabwe National Parks could afford the costly exercise when it couldnâ€™t pay its staff wages.

There is a strange dichotomy at work â€“ as is evidenced by a recent story published by The Zimbabwean. It reports that Central Intelligence Organisation (CIO) operatives are heavily involved in poaching and terrorised conservationist Rory Young, who was involved in training locals in anti-poaching techniques, so badly that he fled with his family for an undisclosed destination.

Young said the Zimbabwe government had given him a two-year permit to train police officers and scouts in the Nyaminyami area round Kariba â€“ but local CIO agents did not like the idea.

â€œI was told to shut up (and they said) that they were above the police and that even if I had done nothing wrong they would find a reason to arrest me and throw away the key unless I stayed away from the area and did no training in Zimbabwe,â€ he said. â€œWhat people don’t realise is that Mugabe’s party and his secret police minions are desperate for cash too. CIO needs cash to pay its secret informers who spy on their neighbours and report any opposition. That cash has to come from somewhere and whilst the official government departments use legal but unethical means to raise funds, the political and secret security apparatus and often the army use any means they can to get it,â€ said Young.

â€œCIO and Zanu (PF) are nothing less than an organised crime syndicate. They are behind the poaching and as they become more desperate they are going to allow more of it. When CIO is behind it no one does a thing. With their tentacles reaching every corner of every village they could shut down the poaching in Zimbabwe in a day,â€ he added.

On the farms and conservancies that have been grabbed by Mugabeâ€™s henchmen there is very little farming going on. The most popular past-time of the new occupiers is hunting. George Charamba, the presidentâ€™s spokesperson and permanent secretary for information, wrote recently in his column in the state-controlled newspaper The Herald, wrote â€œThere is a day we slept at my farm. Very early morning we went out hunting, 303 rifle in arm, feeling impregnable. Soon I picked sight of what looked like some, feline creature, atop some tree easily within the range of the rifle. I fired a shot into the air hoping to scare it. The cat swelled in anger, transfiguring into an aggressive, ready to charge she leopard. It had a cub, one it was ready to defend with its full might, fangs, claws and all.â€ (sic)

In 2012 National Parks confiscated three buffalo carcasses and other game meat from a butchery owned by Provincial Minister for Masvingo Province, Shuvai Mahofa. According to news reports at the time the animals had been poached in the Save Valley Conservancy â€“ much of which has been occupied by the military top brass.

Conservationists have responded with scepticism to the knee-jerk response to the Cecil Affair by the Zimbabwe Parks and Wildlife Management Authority, which issued a statement last week vowing to implement “measures to improve the administration of hunting in the country”.

In 2000, lobbyists managed to get an Amendment to Zimbabwe’s Parks and Wildlife Act passed, concerning the hunting of leopards with packs of dogs. It read “Prohibition or Restriction on use of Dogs for Hunting. 18A – No person shall hunt any animal on any land within Zimbabwe using a dog, except in accordance with the terms and conditions of a permit issued to him by the Director for the purposes of hunting”.

A few months later after pressure from the Safari Club of the United States, a “special” permit was issued by National Parks allowing hunters to use packs of hounds for hunting leopards. There were several conditions attached, such as the hunt must always be filmed, but this was not enforced.

The Permit was also supposed to run for a short period in order for the Department to see if “scientifically” hunting with packs of dogs was going to be viable. 15 years later, the law is still in place and has never been rescinded.