After decades of economic stagnation, political paralysis and a leadership crisis that Madiba bluntly and correctly called â€œtragic failure of leadershipâ€, Zimbabwe is now at a crossroads. 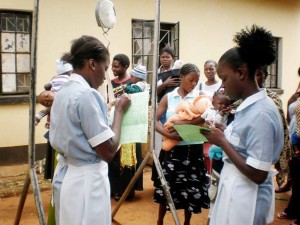 The year 2000 came and went without health for all.

More than ever before, there is now an urgent need to redefine, reshape and re-launch our politics.
As a nation, we need to move away from the politics of personalities, slogans and empty promises to that of values, sacrifice and service – genuine service. We are overdue for good politics.
Not many people know what Zanu (PF) stands for other than that it fought in the struggle, it is led by Robert Mugabe and loves power at any cost. The same applies to MDC which is about Morgan Tsvangirai and â€œchinja maitiroâ€. Beyond that, there is nothing else of substance to talk about. Zanu (PF) means Gushungo, coercion and force; either you agree with them or else. On the opposite end of the spectrum, MDC is about Save and the failed mantra for change.
In 1980, Zanu (PF) appeared like a decent party as they focused on social services and economic development. Health, education (including manpower development) and to some extent, infrastructure, were primary beneficiaries. They even had a noble vision â€œHealth for all by 2000â€. As we speak, some of them have forgotten that the year 2000 came and went without health for all. Instead, the health delivery system as we knew it in 1980 has collapsed – thanks to decades of efficient and systematic destruction.

Political dinosaur
It is evident that, beyond liberation, Zanu (PF) did not have any idea of how to run a nation, let alone manage a modern economy. It is for this reason that the party should have progressively transformed into a modern democratic institution sensitive to the realities of the contemporary world. In the process, they should have devised a clear succession plan.
They didnâ€™t, not because they did not want to but they were too scared of one man, Robert Mugabe.Â  The party needs to be reminded that this is 2015, not 1976. The world has moved on. So must Zimbabwe. We canâ€™t continue to have DOS in the era of cloud computing. Robert Mugabe is now a political dinosaur we canâ€™t afford.
While they may have started reasonably well at independence, somewhere, along the way, Zanu (PF) terribly lost the way. No amount of re-direction or re-calculation will make them re-discover their way. They just have to abandon the journey and let others complete it.

Dead horse
Didymus Mutasaâ€™s recent rantings did not serve any purpose other than to confirm what we have always known, which is that people donâ€™t see the evils of the party until they have been thrown out of the gravy train. Some of us are proud to have been consistent through and through. Yes, we all supported either ZANU or ZAPU at some point but from the mid-1980s, it became evident that we were riding a dead horse.
Mutasa, Rugare Gumbo and a few others only realised the horse was smelly when somebody gracelessly forced them off the forlorn ride. Now they want to present themselves as the biblical Saul at Damascus, Bartimaeus or Matthew at Jericho. Of course they are not. While Joice Mujuru might have a few years of usefulness ahead of her owing to age if she makes the right move now, the likes of Mutasa and others must go home and grow potatoes. Politics is not a retirement village.
Some have started preaching the â€œPeople First â€œmantra, whatever that means. Not so long ago, they were the ones chanting â€œPamberi ne one party stateâ€. They think Zimbabweans are stupid and suffering from amnesia.

New platform
People donâ€™t eat rhetoric. They donâ€™t live on promises. We need to adopt and embrace the new politics of values, sacrifice and service. Zimbabweans need three things before anything else; we need freedom, equality and prosperity anchored by good governance. We canâ€™t achieve this within the current structures. Zimbabweans, let us find each other and determine what we want to be. We need a new platform that brings together all progressive voices, energy, passion and vision.Â  We need the unity of purpose as envisaged by our forefathers when they came up with the concept of â€œzundeâ€ which we knew later as cooperatives. This is the time to work together as a nation thirsty for equality, hungry for prosperity and yearning for real freedom. – Moses Chamboko is a pro-democracy activist and interim Secretary General for Zimbabweans United for Democracy (ZUNDE). You may visit ZUNDE at www.zunde.org or email [email protected]