Based in rented premises at the local showgrounds, their restaurant has become one of the busiest and most popular in Mutare, serving tasty traditional dishes to happy customers. Some of the traditional dishes they serve include rapoko and sorghum meals, pumpkin leaves in peanut butter sauce and tripe (maguru, mazondo, matumbu and masusu). They also 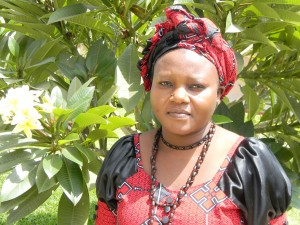 Stacy Samanga – This has been an easy way to generate income for ourselves.

Based in rented premises at the local showgrounds, their restaurant has become one of the busiest and most popular in Mutare, serving tasty traditional dishes to happy customers.
Some of the traditional dishes they serve include rapoko and sorghum meals, pumpkin leaves in peanut butter sauce and tripe (maguru, mazondo, matumbu and masusu). They also serve traditional goat, cow and pigs heads, knuckle bones and trotters. But road runner chicken remains the most popular dish and brings in the most money. Prices of dishes range from $2 to $5. Under the leadership of Stacy Samanga, the enterprise established in 2012 has become a success story and it is obvious that these women are well on their way to becoming self-reliant.

Retrenched
â€œThree of us were retrenched from Pungwe Breweries in 2010 and because there was no chance of finding employment, we came up with the restaurant idea. We recruited two additional ladies who showed an interest in the project. We then each raised $100 and started the business with $500 capital,â€ said Samanga.
They bought the necessary equipment and started their dream journey using firewood to cook with – thereby cutting costs on electricity.
â€œThe biggest advantage is that we use simple methods and equipment. We have realised that this is what the majority of our customers want,â€ Samanga said.

Competition
â€œUs five come from different backgrounds and to start with our efforts didn’t bear much fruit, but we persevered. At first we had many competitors and we realised that we needed to maintain high standards in order to draw and retain customers. So we went for traditional foods only and positive results began to show,â€ said Samanga.
In the beginning they offered a free drink of maheu ( a traditional drink) to woo customers, but in 2013 the scales of success started shifting in their favour as more customers came to taste the great dishes. All five ladies have attended basic food and catering courses.
â€œWith time our good reputation has spread, we now prepare and serve food to regular customers from the city centre who drive all the way here for a meal,â€ explained Samanga.
The women involved in the restaurant have managed to sustain their lives through this business.
â€œWe share the profits equally at the end of each month. This business has been an easy way to generate income for ourselves and has clearly changed our lives,â€ said group member Samanga Cleopatra Zivengwa.
â€œI am able to send my two children to school. I have also added some household property as a result of the income I am getting through this business,â€ she said.

Bank Loan
Based on their success story so far, the women have bigger plans for the future.
â€œOur desire is to see the business grow so that we are able to support ourselves and our children, but the biggest challenge is to get additional funding,â€ said Felistas Dzumbunu who is also part of the group and in charge of financial matters.
â€œWe have challenges with the banks who refuse to grant us a loan to expand the business. We need additional funds in order to empower us and we know that as women we will deliver. We also need additional space for our restaurant and have plans to establish a bottle store,â€ Dzumbunu added.
The women are very proud that their idea has positively changed their economic and social status.