Zimbabwe's economic and political woes have left the country hardly recognisable to those who left before the fast decline in the post-2000 era. Waza blogger JERA recounts the experience of one such returnee. 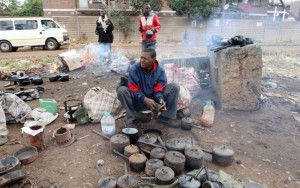 Zimbabwe’s economic and political woes have left the country hardly recognizable to those who left before the fast decline in the post-2000 era. Waza blogger Jera recounts the experience of one such returnee.
My cousin came home to Zimbabwe after thirteen years away in England. I welcomed him at Harare International Airport.
He was impressed with the new airport road – with three lanes on both sides and asphalt so smooth it resembles a bowling alley.
Coming from England’s summer, he arrived at the onset of the southern hemisphere chill. I drove with an open palm over the heater outlet on the dashboard, while he unbuttoned his shirt.
`Warm weather innit?’ he said.
In response, I turned the heat up a notch and rolled up the windows.
`This road is beautiful mate! Why are people complaining about Zim?’
`You’ll soon see,’ I said, still adjusting the heater.
We soon exited the Airport Road and entered Arcadia, a suburb once reserved-before independence- for people of mixed race.
`What the hell!’
`What happened to the beautiful road?’
I glanced at my cousin, and followed his line of vision. A woman stood among piles of garbage, skirt hiked up, legs parted and an orange waterfall gushing from between her thighs.
`Mate, is she peeing in public!?’
I shrugged.
`And the litter! Look at this mate!’
`Sorry. Can’t look. Gotta keep an eye out for the potholes.’
`What happened to the beautiful road?’
`Oh, that was just for the airport. This is reality.’
By the time we reached the CBD, his eyes were permanently set in shock mode, and his voice had risen several octaves higher than normal. He kept tapping my shoulder and pointing.
`Are all these people sellin’ things, mate?’
I nodded calmly.
`Padlocks, toilet brushes, bras! Who would buy a bra off the streets mate!’

Standard response
I gave my standard response – a shrug.
`What the f*$â€, mate!’ He tapped my shoulder thrice. `Look, look, look!’
I followed his hand to a grey hatchback with sneakers of all shades and sizes growing out of its roof, windscreen and bonnet.
A glum looking man sat in the driver’s seat, with door open, resting his chin on the heel of his palm.
All around, people went about their business as if this outlandish display was as normal as sunrise.
We stopped at a traffic light. My cousin, who all along had poked his head out the open window like a Labrador, suddenly began to roll up his window.
`The chill getting to you now?’
`No mate. It’s all these lurkers in the middle of the road. What the hell mate?’
`Oh, don’t mind them.’ I rolled down my window and stuck out a five dollar note. `Airtime blazo!’
A young man bounded towards my window. I exchanged my money for a blue and red phone card, just in time before the light turned green.
Ahead, hooters screamed at two cars that had flown through the intersection three seconds after the light had changed.
`Did you see that, mate? That could have been disastrous!’
`Yah well. Welcome home couz.’
We made our way through the jaywalkers and kerb vendors and, as pre-arranged, made a detour to a flat in the Avenues, where my cousin’s sister lived.

Green sludge
Coke cans and milk cartons crunched beneath the car tyres as we slowly drove into the entrance via a sanitary lane where even the bravest alley cat would not dare live.
Inside the deep crevices in the asphalt, green sludge shimmered in the late afternoon sun. I rolled up my window, not for the chilly May air, but against the pong of sewer water.
At the gate, residents carrying their shopping bags hopped over the puddles of poo and chatted gaily.
I shrugged. `That was then. This is now.’
Up above, on the peeling iron balconies, clothes, blankets and towels flapped like multi coloured boat sails.
`Mate, wasn’t this the best apartment block back in the day!’
I shrugged. `That was then. This is now.’
By the time we arrived at his parents’ house, it was dark, so he pointed less, except for the time a teetering street lamp came into the glare of the headlamps.
The rusted pole leaned at a scary angle towards the road. A metre from its base was a deep dent, where somebody had crashed into it over a year ago.
The council had never bothered to replace the light .
At the gate, I rolled down my window to press the intercom. Half the street was in pitch blackness. All around us, electricity generators croaked like bullfrogs in the night.
We slept in his old bedroom. At some point he woke me. I glanced at my phone; 1.44am.
`Mate…’ he began in a whisper. `How did things come to this?’

Great Migration
I yawned.
`Come to what?’
`The mess. Potholes, hawkers everywhere. What the hell mate?’
`Go to sleep,’ I said. `We’ll talk tomorrow.’
I lay awake in the dark, pondering how best to explain the decline of what was once a beautiful country. Most of my contemporaries joined the Great Migration before the rot began.
As one who had remained, somehow, I felt like a caretaker who had allowed an office building to fall into a state of disrepair right under his watch, or a baby sitter who had slept while the twins ran wild in the home.
– My pen is capped. First published on wazaonline.com