Stella Sadza, 43, from Chitungwiza has been trading in imported used clothes for the past eight years - but a recent government ban on importations spells doom for her. 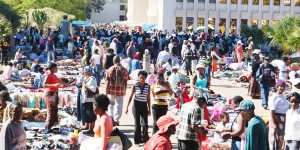 Most of the traders at Mupedzanhamo import bales or smuggle in bales of clothing especially from Mozambique and Tanzania and a client can buy an item for as low as a dollar.

Her husband, who used to work at a food manufacturing firm in Harare that closed down due to viability problems, was retrenched five years ago and has been struggling to find another job. â€œI am actually the breadwinner in the family. Three of our five children are still in school and I have been struggling to raise enough to pay their fees, uniforms and food by selling these second-hand clothes. Now that the government has decided to ban the importation of these clothes, life will certainly be unbearable for us. It is a form of retrenchment,â€ said Sadza.
â€œThe ban has come at a very bad time for the majority of people. Thousands of our breadwinners are losing their jobs and, at the same time, government is busy closing all the doors for making whatever money we can,â€ she added.

Retrenchments
She was referring to the current wave of retrenchments following a July 17 Supreme Court ruling that empowered employers to offload workers by merely giving them notices and avoiding paying terminal benefits.
Since the ruling, more than 20,000 employees have been dismissed, according to the Zimbabwe Congress of Trade Unions (ZCTU). Finance minister, Patrick Chinamasa, recently announced the ban on second-hand clothes and shoes from September 1, saying the move would protect local clothing companies, which have for a long time been struggling to keep afloat due to cheap imports.
Sadza operates from the bustling Mupedzanhamo (End the poverty) market in Harare which got its fame for selling cheap used clothes more than two decades ago.Â  Most of the traders at Mupedzanhamo import bales or smuggle in bales of clothing especially from Mozambique and Tanzania and a client can buy an item for as low as a dollar.
â€œThe ban will mean an end to Mupedzanhamo. There will be little activity here once traders are stopped from importing clothes,â€ added Sadza.

Business was good
At one time, business was so good she managed to save enough money to finish the construction of the family house in Chitungwizaâ€™s Zengeza 2 suburb.
Her son, the first child, is about to complete a sociology degree at the University of Zimbabwe, courtesy of the money she generated from her trade. â€œSome of the money I raised here helped buy cattle and farming equipment for our rural home in Zvimba. I also helped look after my late sisterâ€™s children. But now that things are like this, they will drop out of school,â€ she said.
The ban comes as government is flushing out teeming vendors from urban centres. Second-hand clothes are popular in Harare and other towns because they are affordable. Jackson Muchineripi, a teacher based in Chitungwiza, said he hardly bought clothes from retail shops.
â€œMy wife and I buy clothes for the children and ourselves from flea markets. People wonâ€™t know that you didnâ€™t buy from the fashionable shops and if you take your time to select, some of the clothes are just as good as the ones you buy from Topics or Edgars,â€ he said.

Source of hope
â€œIn fact, even those people that want to give the impression that they are moneyed also get their clothes from the flea markets. The economy is performing badly and second-hand clothes are our source of hope for decent clothes,â€ added Muchineripi.
Kudzai Tembani, 25, a single mother who sells used clothes at Mupedzanhamo, is disturbed by the importation ban, but she is undeterred.
â€œIf Chinamasa thinks he is fixing us, he must think twice. The ban will lead to a rise in smuggling. As it is most of the stuff we sell here is not declared at the border and we have always connived with customs officials to either under-declare our bales or get them in free after paying some money,â€ Tembani told The Zimbabwean.
John Robertson, a respected economic consultant, said the ban was both bad and good news. â€œThe implications of the ban are both short term and long term. In the short term, the thousands of people making a living out of used clothes will be adversely affected as that would disrupt their source of income.

Small shops
â€œIn the long term, however, the move will revive the clothing industry that has been brought to its knees by cheap imports. Once the clothing industry is revived, thousands of new jobs will be created and workers would get more money than from informal trade,â€ said Robertson.
Trade in used clothes is not limited to informal flea markets. Hundreds of small shops have sprouted in the cities and towns over the years, taking advantage of the opportunity to import and sell second hand and new but cheaply manufactured clothes, particularly from China.
These shops, which employ hundreds of people, will also be affected by the ban, said Robertson.
Clothing manufacturers have for a long time urged government to ban imported goods, saying the competition they brought was the main factor driving viability problems within the sector. Some local clothing manufacturers have, however, managed to make modest exports of their products.
The Zimbabwe Clothing Manufacturers’ Association (ZCMA) last week urged its members to make use of the bilateral trade agreement which Zimbabwe signed with South Africa in 1964 to maximise their exports.
The associationâ€™s chairman, Jeremy Youmans said: â€œZCMA is urging its members to make use of this trade agreement, which allows clothing manufactured in Zimbabwe to enter the South African market duty free.â€
South Africa was the largest market in the region and relatively easy to supply, he added.