Zimbabwe all-rounder Malcolm Waller has been cleared to bowl again, by the International Cricket Council (ICC). 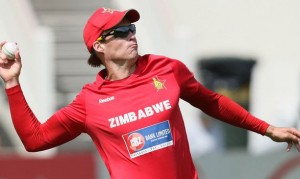 The ICC said that Wallerâ€™s bowling action has been found to be legal, and the player can now resume bowling in international cricket.

The 30-year-old was initially reported after the second Test against hosts Bangladesh in Khulna in November last year. However, following an independent assessment carried out in December, he was found to be bowling his off-spin deliveries with an illegal action.

Waller underwent a re-assessment of his bowling action following remedial work at the University of Pretoria.

The ICC statement pointed out that the review showed that the amount of elbow extension in Wallerâ€™s off-spin deliveries was within the 15-degree level of tolerance permitted under the ICC Regulations for the Review of Bowlers Reported with Suspected Illegal Bowling Actions.

The umpires can still report Waller in the future if they believe he is displaying a suspect action, or that he is not reproducing the action that has been declared legal during this assessment.

Waller will captain of the Zimbabwe Presidentâ€™s XI in the Africa Twenty20 Cup tournament, which will be in South Africa from the 4th of September to the 4th of October.