Thanks to the fundraising efforts of staff at Wirral Pharmacy in England, an entire village has access to life-giving water CLAYTON MASEKESA reports. 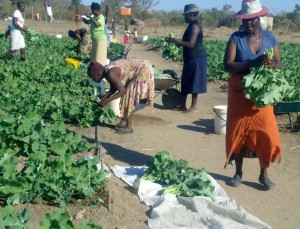 Members of the scheme doing the grading of the vegetables ready for market.

After facing serious water shortages for many years, some women in Masomere Village now have a source of income through the establishment of a small scale-irrigation scheme – thanks to the fundraising efforts of staff at Wirral Pharmacy in England who donated a water pump.
The pump has made possible the implementation of a new small-scale irrigation technique that has helped the women embark on a horticulture project that has given them new hope. They had to abandon their irrigation scheme some time back because of shortages of water.
Since 2011, staff from Medix Pharmacy at The Warrens Medical Centre in England have been raising money to buy a water pump â€“ known as The Elephant Pump.
Installed by The Africa Trust charity in 2013, several women from Masomere Village have embarked on an irrigation scheme using water pumped from Gaza Dam.

Born in the village
The project has been coordinated by Maxwell Chari, who was born in the village and is now based in the United Kingdom. It involves 12 women representing different families in the village participating in the irrigation project on a large piece of land land where different gardens have been established. Each household takes care of its own garden.
The women say their lives have been transformed, with positive knock-on effects for the wider community. The women grow all sorts of vegetables, including rape, covo, tomatoes, onions and lettuce.
TheÂ  leader of the group, Mavis Tanyanyiwa, said the project had helped them to kick-start a dramatic change in the village. â€œWe have been failing to revive our irrigation scheme because we did not have a pump. But the gift of this new pump has helped us to re-launch our path. We managed to set up a simple irrigation system using water from the nearby dam,â€ she said.
â€œAfter helping to clear the area of shrubs and trees and level the ground, each member was allocated some lengths of pipes to carry water to their gardens,â€ explained Tanyanyiwa.

Chain reaction
She added that many households across the area were benefiting from this low-cost and low-tech irrigation system. â€œThe project has started a chain reaction that has spread far beyond the members. The benefits from this one simple action are now also rippling out to thousands of other people from the wider communities,â€ she said.
Tanyanyiwa said for the past two years the irrigation scheme has engaged them in meaningful economic activities and contributed to the development of the village.
Some women in the scheme have won tenders to supply their produce to local secondary schools as well as to individuals in the community. Many of them now have market stalls at the busy Gaza business centre along the Nyazura/Murambinda highway.
â€œWith the profits the women have managed to pay for their childrenâ€™s school fees and buy school uniforms. All the women participating in this scheme have been able to send their children to school,â€ she admitted.

Sustainable
Headman Masomere was elated by the move and thanked the Wirral Pharmacy staff for a job well done. â€œWe have for a long time been unable to pump water from Gaza Dam following the breakdown of several boreholes servicing the village. This will be a thing of the past as we are going to have sustainable income generation from the irrigation project,â€ he said.
Masomere said he had appealed on many occasions to government to address the water crisis, but to no avail. â€œMost of our boreholes are not functioning up to now. This has forced the majority of villagers to fetch water from the dam for domestic use while others walked long distances to neighbouring villages in search of water,â€ he explained.
â€œI would want to encourage all the villagers to make good use of the pump and to protect it. This is our pump and I will put security staff to safeguard it from vandals and thieves who might want to steal parts,â€ he warned.
The womenâ€™s ambition is to acquire more land and expand the irrigation scheme. They said funds should be channelled towards their cause with the aim of contributing to the sustainable improvement of the living standards of the poorest sections in their community.

For more information on this project and advice on how you can replicate it in your area please contact: Mavis Tanyanyiwa Tel: 0776 309 986