A few weeks ago, there was much talk about the formation of a grand coalition by Zimbabweâ€™s political parties. 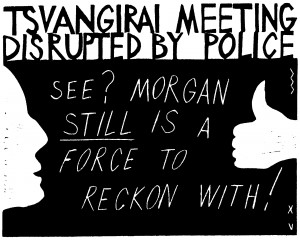 Since then, there has not been muchâ€”if anyâ€”movement, and this has prompted us to wonder if our politicians ever walk their talk.
The first person in recent times to ignite hope of a broad-based political convergence that the country needs to rid itself of the cumbersome and retrogressive rule of Zanu (PF) was Morgan Tsvangirai, the MDC-T president. He made the promise while delivering his parallel state of the nation address in Harare. That was also ahead of the prayer meeting for the abducted activist, Itai Dzamara.
When almost all the parties forming the opposition converged in Highfield to remember Dzamara and signed a charter with civil society to fight for a return to democracy, hopes were raised once again.
Never before had political parties been brought together under the same platform, to articulate and represent the aspirations of the majority of Zimbabweans.
But sadly that hope is disappearing fast. We have not seen any zeal or evidence of working towards the grand coalition. The political parties remain mum on their intentions.Â  More disturbingly, they do not seem to have a single clue about how they would work to converge as a coalition.
We would have expected that, by now, they should have come up with a blueprint on how to form a sustainable convergence. While it is politically prudent to keep the strategy away from Zanu (PF)â€™s destructive tentacles, the major concern is that, when approached, these parties admit that they are not doing anything. All you hear is grandstanding propaganda from them – nothing meaningful outside the political gibberish.
If the opposition thinks 2018 is still far away, it needs to think again. When there is a crisis and no solution is in sight, time moves very fast. Thus, it is important that the parties take their idea of forming a coalition seriously and focus on it as perhaps the only possible solution to the political, economic and social woes that we are currently burdened with.
History shows that forming a political convergence is not an easy task. Several attempts have been made in the past, but they all collapsed. The parties cannot afford the luxury of leaving everything to the last minute. We all know what Zanu (PF), backed by the state machinery and all the other advantages of incumbency, is capable of doing when faced with a potential threat to its power.
Zanu (PF) is currently burdened with its own problems and the opposition must take advantage of the chaos and confusion. It will never get an opportunity as good as this one.