Zimbabweâ€™s leading satirical comedy show Zambezi News will be going on an international tour from the 26th of August to the 5th of September 2015. The tour will see Michael K, Outspoken and Comrade Fatso performing for audiences in the UK, Germany and Mauritius. 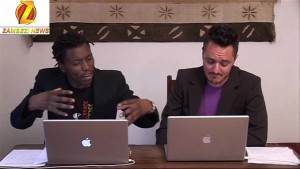 The comedy trio will first be travelling to London for a show at leading comedy venue, The Comedy CafÃ© on the 27th August. They will share the stage with the UKâ€™s famed satire show, The Revolution Will Not Be Televised. From London they proceed to perform at the hugely popular Shambala Festival in Northamptonshire on the 29th August. Shambala Festival is set to host over 10,000 revellers as well as featuring acts and musicians from around the world. The tour then moves to Berlin, Germany for a show in collaboration with leading German electro DJ, Andi Teichmann. The Zambezi News trio then end their tour with a final show at the DSTV showcase in Mauritius on 4th September.

Zambezi News Season Four was shot in June 2015 and is currently in its editing phase. The trio of comical newscasters has previously performed internationally in Sweden at the Gothenburg International Book Fair, the South African Comics Choice Awards 2013 Teatro at Monte Casino, Johannesburg and Bush Fire Festival in Swaziland.