Police in Zimbabweâ€™s capital, Harare, are carrying out a violent crackdown on unlicensed street vendors marked by beatings, destruction of their goods, and arbitrary arrests, Human Rights Watch said today. Sixteen people remain in detention following their arrest on July 14, 2015, on apparent trumped-up charges of public violence. The majority of the street vendors 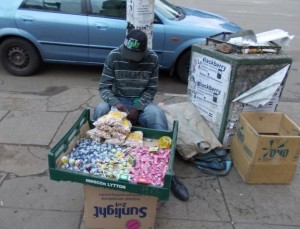 The majority of the street vendors are women living in extreme poverty, part of the more than 70 percent of Zimbabweans who live on less than US$1.25 per day. The government should halt the crackdown and work with the vendors and their representatives on a comprehensive plan that would allow them to work while addressing the cityâ€™s concerns, Human Rights Watch said. The government should also hold those responsible for the violence to account and provide redress to the vendors.

â€œPolice harassment and arrests of street vendors has rapidly escalated in recent weeks since the Harare City Council launched its â€˜clean-up campaign,â€™â€ said Dewa Mavhinga, senior Africa researcher at Human Rights Watch. â€œThe lack of a vending license is no grounds for beating and jailing people who are desperate to earn a living.â€

On July 7, the newly appointed minister of local government, public works, and national housing, Saviour Kasukuwere, told state media that he would ensure that the Harare City Council cleans up the city and relocates an estimated 20,000 unlicensed street vendors to designated vending sites outside the capital. Kasukuwereâ€™s predecessor had on June 1 issued a seven-day ultimatum for vendors to move to the sites outside the city.

The day after the new ministerâ€™s announcement, Harare municipal police began their crackdown, using unnecessary or excessive force, beatings, arbitrary arrests, and unlawful seizure and destruction of goods. On July 9, the municipal police beat and arrested 26 vendors, many of them women, and handed them over to national police, who charged 23 with â€œconduct likely to cause breach of peace,â€ and 3 with assault. The following day municipal police seized and burned street vendorsâ€™ goods, mainly clothing. The group of 23 charged were later fined and released; the 3 charged with assault were granted bail on July 24.

On July 14, municipal police beat and arrested 16 more street vendors, including Sten Zvorwadza, Samuel Wadzanai Mangoma, and Lucy Makunde, leaders of the National Vendors Union of Zimbabwe (NAVUZ), which represents street vendors. They were charged with inciting public violence after they demanded that municipal police return goods seized from them.

Several vendors were injured in the beatings. But prison officials denied the detained vendors access to medical treatment, despite a court order secured by their lawyer. The magistrate court denied them bail on July 21. Their lawyer filed an appeal at the High Court against the denial of bail, which has been repeatedly postponed and is now scheduled to be heard on July 30. Their trial is scheduled to begin on August 4.

On July 24, police arrested three activists who were part of a group of 60 street vendors who visited the detained NAVUZ leaders at Harare Remand Prison. Police alleged that the three activists â€“ Edgar Gweshe, Charles Nyoni, and Don Makuwaza â€“ had taken photographs at the prison, which is prohibited under the Protected Places and Areas Act. They were held for a day, then released on bail.

On July 25, police arrested three more activists â€“ Mfundo Mlilo, Nixon Nyikadzino, and Dirk Frey â€“ on charges of organizing a meeting outside Harare Remand Prison in violation of the Public Order and Security Act. The court ordered their release on July 27 because they were detained for more than 48 hours without being brought to court, as required by law.

International standards on the use of force by law enforcement personnel, including police and government inspection agents, are the 1979 United Nations Code of Conduct for Law Enforcement Officials and the 1990 UN Basic Principles on the Use of Force and Firearms by Law Enforcement Officials. The Code of Conduct provides that law enforcement officials, in performing their duties, respect and protect human dignity and uphold everyoneâ€™s human rights. Law enforcement officials may use force only when strictly necessary, for a specific legitimate aim, and that is strictly proportionate to the need.

The authorities should immediately drop their spurious charges against the vendors and activists, and release those still in detention, Human Rights Watch said. Zimbabweâ€™s government should respect and protect the rights of all citizens, including street vendors and the activists who represent them.

â€œBeating women who are struggling to survive as street vendors and bringing trumped-up charges against them is no way to treat Zimbabweâ€™s citizens,â€ Mavhinga said. â€œWhat the government needs to do is to work with the vendors to find a way for them to work freely and safely.â€