Miners continue to bear the brunt of the politicisation of the country`s natural resources, says a statement issued today by the Zimbabwe Informal Sector organisation ZIPO. Youths led by Gift Kanosvimhira working under an outfit known as the Presidential Youth Initiative and another other group led by Ruwizhi Fernando, Jonah Ngwenya and Batsirai Musona are 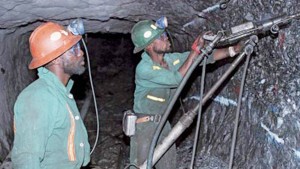 Miners continue to bear the brunt of the politicisation of the country`s natural resources, says a statement issued today by the Zimbabwe Informal Sector organisation ZIPO.

Youths led by Gift Kanosvimhira working under an outfit known as the Presidential Youth Initiative and another other group led by Ruwizhi Fernando, Jonah Ngwenya and Batsirai Musona are fighting each other over the control of the gold-rich Kitsiyatota minefields.

Following the “banning” of mining operations by the provincial Joint Operations Command (JOC), thousands of smallholder miners have lost their sources of livelihood and continue to wallow in poverty in Bindura. There are an estimated 500 000 small-scale miners, most of them in gold production. They constitute a significant part of the electorate in rural areas and have been used to enforce support for Zanu (PF) in elections.

Analysts say this clearly shows the continuing use of this poor and disadvantaged community for both Zanu (PF) party political and electoral purposes.

ZIPO says it is shocked that Kanosvimhira continues to enjoy full and unrestrained access to the minefields working under Side Electrical Private Limited, a company which holds a Presidential Special Grant over the mine.

The group is under pressure to bar those who are perceived to be aligned to the opposition MDC-T from accessing the mines. Notable figures who have been affected include former MDC-T Councilor Nobert Dhokotera, Amiri Njawara and Peter Mabika, to name but a few.

On July 28 Kanosvimhira was summoned by the officer commanding Bindura at the Provincial Police Headquarters where he was told by the Dispol that he would be forced to cease operations if he continued to allow MDC-T aligned activities to carry out mining operations. According to ZIPO, the meeting was also attended by prominent Zanu (PF) activists in Bindura such as Jonah Ngwenya, Ruwizhi Fernando, Batsirai Musona and a woman`s league member only identified as Mai Mbereko.

A Zanu (PF) Provincial Coordinating Committee has been called to look into the issue. This follows fierce internal fighting for the control of both the lucrative minefields and the province at large. The warring factions are led by Bindura North legislator Kenneth Musanhi and Gift Kanosvamhira on the one hand while the other group is led by Martin Dinha and Jonah Ngwenya.

ZISO is very concerned by the politicisation of the mining operations in this area. â€œThe victimisation of individuals who are perceived to be aligned to the opposition also show that the government continues to view its citizens on partisan lines completely oblivious of the constitutional entitlement of all citizens of this country to its resources by virtue of being Zimbabwean,â€ says the statement.

ZISO is further disturbed by the continued use of JOC and other state organs to decimate and render the informal sector subservient to the ruling party`s whims and caprices.

ZISO calls for an urgent meeting of the stakeholders to address the issue and has urged government to assist small-scale miners to transform their operations into meaningful business enterprises as part of formalising the informal sector.

â€œThis requires transparent governance of the precious resources and providing training, capital and equipment to the miners. There is need to facilitate partnerships with foreign investor while ensuring that the miners are equipped to negotiate effectively and to the best of their interests in a win-win scenario,â€ says the statement.