A startled bull elephant sent tourists running for cover when it rammed two men and overturned their picnic table at a Zimbabwe safari park. 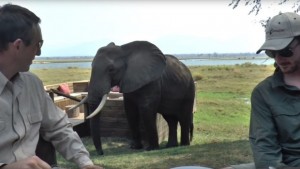 The group was enjoying lunch at Mana Pools National Park in northern Zimbabwe when the bull elephant approached their table. A video posted on YouTube shows the elephant strolling towards the group and pausing for a moment while it surveys the scene.

The tourists appear nervous but remain quiet as they try not to look at the animal.

It then becomes agitated, flapping its ears as it ploughs into one man and then another, slamming them into their table and knocking it over. Plates and cutlery crash to the ground.

As the other diners run for cover, the elephant wanders calmly away.

The two men have been identified as Irishman Stephen Montague, 39 and his brother-in-law Shane Wolf. Both emerged from the incident with only a few cuts and bruises.

Mr Montague’s father Paddy told Express.co.uk that his son is fine and has continued his holiday in Zimbabwe.

“He wouldn’t let something like that stop him. He loves to go where the action is.”