Self acclaimed mbira queen and singer Hope Masike is set to conduct mbira lessons slated for the 19th of September at St Peters Kubatana School, Jibilika Centre in Harareâ€™s oldest suburb Highfield her hometown. Best known for her sizzling voice, exceptional mbira playing and her role in the popularization of modern, strong and well defined 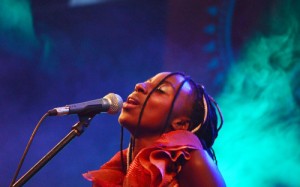 Best known for her sizzling voice, exceptional mbira playing and her role in the popularization of modern, strong and well defined mbira genre which has a together- fusion of different music styles, Masike is very optimistic that the event will attract a sizeable crowd.

â€œThe idea was triggered by workshops i was holding for foreign fans who wanted to learn how to play the instrument.

â€œDuring my tour abroad, I was holding workshops to teach foreignÂ mbiraÂ lovers who could afford to attendÂ mbiraÂ camps and passionate in dressing mbira in new cloaks.

â€œI held numerous workshops and thought, why do we not hold such kinds of workshops back home in this format or another,â€ said Masike.

The mbira class will be first of its kind with three being the lucky number relatively motivated from her three-month tour of Europe,Â .as the class will be for three hours, learning three songs, at the cost of $3.

The three hour event will kick start at 10am will begin with a brief history of the mbira instrument t, followed by lessons that will get students playing three songs by the time they finish focusing on theÂ nyunga-nyungaÂ type ofÂ mbiraÂ â€“ also calledÂ kalimbaÂ ,

â€œThree songs, in three hours, for three dollars is what itâ€™s all about,â€ added Hope.

Masike appealed to the corporate world to assist in any way in order to improve the livelihoods of the underprivileged children.

Masike is working in partnership with Jibilika and Zimbo Jam which are creative social enterprises that promote culture,Â mentorship,Â volunteering in schools and communities working on strategies and training to professionalize young upcoming artists.

Jibilika director, Plot Mhako said they are delighted to be part of this program and hope to engage in such sessions that appreciate local musical instruments regularly.

â€œThis is a great initiative and inspiring to see an internationally acclaimed artist realizing the need to give back to the community and encourage young people to appreciate indeginous musical instruments,â€ said Mhako.

NAMA award winning Masike has also graced several national functions in Zimbabwe such as national youth fundraisers to inaugurations of Heads of States and shared the stage with acclaimed artistes like Salif Keita, Oliver Mtukudzi, Stella Chiweshe, Chiwoniso Maraire, Oliver Mtukudzi, and beyond borders artists such as Germany band FAVO, Mafikizolo, Zahara among others.

The mbira class comes aback Hopeâ€™s recent return from her tour in Milan where she gave a thrilling performance at the Milan Expo 2015 on the Zimbabwean Day and left revelers clamoring for more.