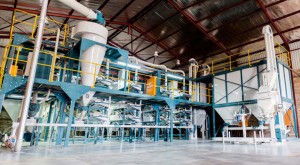 Approval was eventually granted in May this year paving way for Bakhresa to acquire BRI and inject $20 million into the business, of which $12 million would be used to pay creditors.

The brand disappeared from Zimbabweâ€™s supermarket shelves in 2012 after the countryâ€™s second largest food and milling company, Blue Ribbon Industries (BRI), was mothballed for 22 months owing to viability problems.

In 2009 the company was choking from debts worth $29 million while capacity utilisation plummeted to between 11 percent and 29 percent, leaving it with no option but to file for judicial management.
The High Court placed the company under provisional judicial management in 2012 and subsequently under final JM in 2013 to pay way for new investors to inject fresh capital into the insolvent business. â€œGiven the net liability position, the BRI group could not continue to operate as a going concern,â€ said the judicial manager, Reggie Saruchera of Grant Thornton chartered accountants in a report to creditors last week.

At the time, all of the groupâ€™s assets had been secured by creditors who were owed millions of dollars – chief among them commercial banks.

Major bidder
After waiting for a suitor for a year, Bakhresa emerged the major bidder in 2013 among eight others seeking to snap up a 75 percent stake in BRI. However, the process would last three and a half years due to delays in indigenisation approval. The indigenisation law limits foreign ownership in local companies to 49 percent.

ApprovalÂ  was eventually granted in May this year paving way for Bakhresa to acquire BRI and inject $20 million into the business, of which $12 million would be used to pay creditors. The investment is expected to be increased to $40 million in the next six years to replace antiquated equipment.

â€œAre these percentages the best we could have gotten? Yes they are. We waited for three and a half years, we searched high and low for an alternative investor and there was none,â€ Saruchera told shareholders during a scheme meeting where creditors voted in favour of the takeover.

â€œWe had other smaller local investors shouting on top of their voices about them being able to be put together and take over Blue Ribbonâ€¦.. but to be honest, the company requires real money for it to take off,â€ he said.

Bakhresa operates in a number of countries including Tanzania, Uganda, Rwanda, Kenya, Burundi, Malawi, Mozambique and most recently South Africa where itâ€™s setting up a 750 tonnes per day wheat meal plant.

Saruchera said the shareholder of BRI would get a token $1 for the insolvent firm.Â  â€œBakhresa will acquire the entire shareholding of BRI, at a purchase price of one dollar, thus giving Bakhresa control and full ownership of BRI, BRF, Nutresco and Mitchell,â€ he said.Â  â€œI donâ€™t know how they are going to share a dollar but we will work the mechanics out for us to proceed.â€

Employees will receive a payout of 62 percent of the total amount owed while ZB Bank, one of the biggest losses will only get 30 percent and unsecured creditors 15 percent.

Sailed through
â€œWe persuaded Bakhresa to also consider the plight of workers who will not be required for continuing operations and they generously agreed to provide an additional $929,000 to make sure we deal responsibly with the workers,â€ said Saruchera. He narrated how the industry ministry and the central bank intervened to ensure that the deal sailed through.

â€œI remember I went to a meeting and he said (industry minister, Mike Bimha) bring the investors and we phoned Bakhresa and they came all the way from Tanzania.Â  We went to his office (Bimha) and for the first time in my experience, you see a minister walking in with a paper in the hand and a proposal and he said to the investor: â€˜This is my proposal, I will stick my neck to it if you sign off today, we will have a transaction,â€™â€ said Saruchera. Within five to 10 minutes the deal was sealed.

Prior to that, BRI had gone into a grain supply agreement with a local firm, Mega Market which Saruchera said had kept the brands alive while the company started operating at break even.
â€œIt has been a good transaction in the form of allowing our company to continue to operate and allowing our workers come to work every other time,â€ he said. â€œWhen we started running this business, no banker wanted to touch us with a nine-metre pole – we had leprosy.â€

Unpaid leave
He commended workers who agreed to go on unpaid leave.Â  â€œSome agreed to go away and leave a few champions to get the business going. We were not paying a salary but allowances. That spirit can get our country working again,â€ he said.

During the meeting, some creditors welcomed the deal while others said there was need for shareholders to be punished for mismanaging the company.Â  Bencook Mabika, a member of the small-scale farmers, expressed disappointment at how the firm was managed.

Unsecured creditors who suffered the major loss pleaded with the new investor to continue to engage them as they had supported the company during its tribulations.

Zimbabwe Investment Authority chairman, Nigel Chanakira, who is also owed by BRI said the 15 percent he would get was better than nothing.Â  â€œI say farewell to this particular money I will be writing off and hope that in five years or so we can look back and say we participated in this scheme and the company is progressing well,â€ he said.

Clifford Mabasa, representing the workers, said they supported the takeover and were glad that theyÂ  would walk away with something. â€œLet’s forget what happened and respect the future and I hope all of us are going to enjoy,â€ he said.