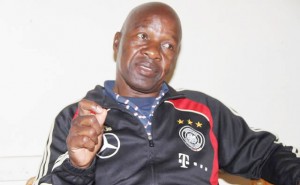 With a midfield pivot of Willard Katsande and Danny Phiri behind, Zimbabwe played the full game effectively without a playmaker. The off-form Mushekwi was taken out late in the second-half and only after persistent whistling from disgruntled fans with Pasuwa appearing determined to play him for the entire 90 minutes.

Homela has joined the chorus of those who believe Zimbabwe formation negatively affected their play and ultimately cost them victory. Former national team coach Homela said;â€I thought it affected our offensive play. The idea was to have as many people in the offensive third but I donâ€™t think it served any purpose. The presence of those two is negative because we didnâ€™t have midfielders that supplied them with clean balls.

â€œI personally would have thought maybe we should have tried to balance it up by having a defensive midfielder yes, then two creative midfielders that would push forward and try and supply the three attackers upfront with clean balls. Most of the balls that went into the offensive third I thought were50-50 balls which seasoned defenders would deal with and they did that …

â€œWe needed creativity and at one time I kept on questioning why he didnâ€™t use this Rooney guy (Ronald Chitiyo). I thought he would have been the midfielder that I would have wanted to see. He should have reduced the strike-force and supplemented that by using Rooney as the link come striker.â€

Zimbabwe needed victory to seize the initiative in Group L, although Sundayâ€™s win left them tied with section leaders Swaziland on four points from the opening two matches.