A small field of eight horses will battle for the 1,300-metre Sable Flyers Handicap at Borrowdale Park Racecourse Sunday. 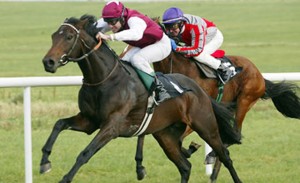 Gentle Brook and Pegwell, who took part in the season-opening Commander Airforce of Zimbabwe Borrowdale Sprint, have also been nominated for this sprint event, with stake money of $8,000 of which the winning is guaranteed $4,800. The second-placed horse will be rewarded with $1,600 while those that come third and fourth will take home $1,000 and $600 respectively.

The race also marks the return of Bridget Stidolphâ€™s four-year old Print the Pounds, who missed part of last season, including the final leg of the Triple Crown, the Zimbabwe Derby, through suspension.
This was after the then three-year-old had won the first leg of the Zimbabwe Guineas, but was penalized for her scratching from the Bloodstock South Africa due to lameness. Although Print The Pounds has not been racing, she starts off among the favourites over a distance she is too familiar with.

Coincidentally, trainer Stidolph won the Sable Flyers Handicap last season with Caseyâ€™s Dance, when she was holding fort at Lisa Harris yard. Print The Pounds is Stidolphâ€™s only entrant in the race.
Amy Bronkhorst fields almost the full field, as she lines up five of the horses in Gentle Brook, Pegwell, Flamingo Lily, Supa Dupa and Swinging On a Star.

Alyson Wright sends out her only fielding in the race in the form of Tallie Two, while Kirk Swanson fields Iron Lady, who will be ridden by Francois Herholdt. On the same day that Caseyâ€™s Dance won the Sable Flyers Handicap, Tallie Two took part in another race that she won with Brendon McNaughton on the irons.